One of the most recognizable and graceful landmarks in New York City, the Brooklyn Bridge is the oldest — and still one of the longest — suspension bridges in the United States. The 6016-foot-long bridge over the East River links New York’s Manhattan and Brooklyn boroughs. When the Neo-Gothic structure opened in 1883, it was the longest suspension bridge in the world. Click to book your Brooklyn Bridge and Seaport walking tour.

Imagine standing over 100 feet above the East River, watching boats pass underneath you, and gazing at the Statue of Liberty in the distance. The Brooklyn Bridge is nice to look at from far away but to really experience everything it has to offer, you have to walk across!

The Brooklyn Bridge is one of the most prominent sights in New York City as well as an engineering marvel with a fascinating history. 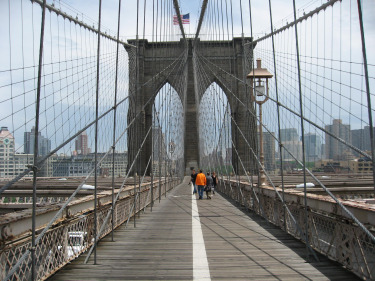 The Brooklyn Bridge stands 1595 feet above the East River, supported by two 276-foot high stone towers, each topped with Neo-Classical archways. The Bridge is 6016 feet long (1.13 miles), measures 85 feet wide, and each of the bridge’s four steel cables measures 3578.50 feet long. When it opened in 1883, the Brooklyn Bridge was 50 percent longer than the next longest of the world’s suspension bridges.

It spans over the East River, linking Manhattan and Brooklyn. With massive masonry towers and a web of cables, this suspension bridge is instantly recognizable even to many who have never been to New York.

Walking Across the Brooklyn Bridge

This walk is one of our top recommendations to everyone who visits us, and no one has left disappointed. The bridge itself is more impressive up close and the views are extremely rewarding.

The walk is about 1 mile if you go all the way across. It’s a little bit of a trek, but definitely worth it.

The wooden pedestrian walkway is in the center of the bridge and elevated above the road lanes. You will enjoy outstanding views of the surroundings including Manhattan and Governors Island.

You Can Do It!

We strongly suggest walking all the way across the bridge (about 1 mile). Many tourists will stop at the first tower closest to Manhattan and then turn back, so the rest of the bridge is usually less crowded.

You can either walk from Manhattan to Brooklyn and return on the subway or vice-versa. The view is great in either direction, but walking toward Manhattan is a little more scenic with all the buildings in front of you.

Better yet, walk both ways!

Great views, a fun walk, and entertainment for free! We challenge you to find another deal this good in all of New York City.

Starting Your Walk on the Manhattan Side:

The closest subway stop is the Brooklyn Bridge-City Hall Station on the 4-5-6 Subway line. This station is located right across the street from the pedestrian entrance to the bridge, where you can begin your walk.

You can get on a Subway back to Manhattan at the High Street Station. Watch for the stairwell on your left that appears shortly after the walkway becomes paved. Walk down the stairs to the street level and proceed south on Cadman Plaza East until you see the subway station.

Starting Your Walk on the Brooklyn Side:

Take the A-C Line to the High Street Station in Brooklyn. Walk north on Cadman Plaza East until you get to a stairwell on your left that leads up to the bridge.
While In Brooklyn…

Since you’ve made it all the way to Brooklyn, why not stay and enjoy it for a little while?

Fulton Ferry Landing has excellent views of Lower Manhattan and the Brooklyn Bridge and is a perfect place to take pictures. On a nice Saturday, you may see bridal parties stopping by this popular photography spot. The view is perhaps the most beautiful at night.

The Brooklyn Bridge was constructed to span the East River between the boroughs of Manhattan and Brooklyn. Before the bridge was built, the only way to cross the East River was by ferry, which could be difficult and treacherous in the winter.

It is one of the oldest suspension bridges in the United States.

Construction of the Brooklyn Bridge: A Family Effort

The Brooklyn Bridge was designed by John Roebling, a German-born engineer. Before construction began, he was conducting a survey of the site from a wharf when a boat collided with the wharf, crushing his foot. Three weeks later, John Roebling died of tetanus.

His work was continued by his son, Washington Roebling, whose health also suffered from working on the bridge. Washington became ill from decompression sickness, or caisson disease, from working long hours at high atmospheric pressure. This condition, little known at the time, afflicted many of the bridge workers who labored inside the underwater caissons (large watertight structures that provide a dry environment for working on bridge pier foundations). Because of the illness, he became partially paralyzed and could only supervise through binoculars from his balcony.

When Washington Roebling could no longer visit the site, his wife Emily Roebling took over for him. She effectively oversaw the completion of the bridge by developing knowledge of engineering, inspecting the site, and reporting progress to her husband.

When the Mayor of Brooklyn wanted to replace Washington in 1882 because of his sickness, Emily addressed the American Society of Civil Engineers – the first woman to ever do so. Because of her appeal, the ASCE allowed Washington to remain as Chief Engineer.