Located across from Central Park in the heart of Manhattan, this New York City landmark is named for Christopher Columbus. A majestic marble statue of the explorer rises from the middle of Columbus Circle, which is also home to the Time Warner Center.

Visitors marvel at how Columbus Circle is an actual circle. The designer of Central Park, Frederick Law Olmsted, planned the circle as a grand entrance to the massive urban park. Columbus Circle itself was designed by William P. Eno, a businessman, and innovator of road and traffic safety. It was completed in 1905 and renovated extensively in 2005 with improved landscaping and the addition of new water fountains, wooden benches, and grassy areas.

Italian sculptor Gaetano Russo created the monument to Christopher Columbus at the center of Columbus Circle. It was erected in 1892 when New York commemorated the 400th anniversary of the explorer’s landing in the Americas. The monument features a 70-foot granite column adorned with bronze reliefs of Columbus’ three ships. A marble statue of Columbus sits atop the column, and the pedestal depicts an angel holding up a globe.

The Merchant’s Gate to Central Park, located at the northeast side of Columbus Circle, features a majestic memorial to the 258 American sailors that were killed when the battleship USS Maine exploded and sank in Havana’s harbor in 1898, sparking the Spanish-American War. Completed in 1913, this massive structure was created from marble and bronze and features a base in the shape of a ship’s prow surrounded by figures symbolizing Peace, Victory, Courage, and Fortitude. 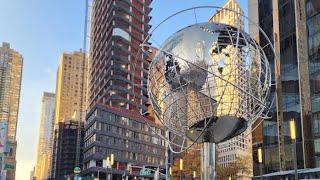 A Whole Foods Market is located in the basement of the complex, which also houses the CNN studios and the Jazz at Lincoln Center venues which overlook Central Park and the Manhattan skyline.

Many vibrant neighborhoods with numerous dining options surround Columbus Circle including Hell’s Kitchen, the Broadway Theatre District, and the Upper West Side to the north.

How to Ask for Directions in an Unfamiliar City
Tailgating Terror: Why You Should Always Leave Space Around Your Rental
How to Avoid Traffic at the George Washington Bridge
Queensboro Bridge