The Beauty of New York City

This article is all about the beauty of New York City and why it is such a tourist attraction.

New York City is a fantastic city which is situated in the North of America. Many landmarks have become very well known to foreigners. The Statue of Liberty, Times Square, and Broadway can all be found in New York and are all extremely popular.

One of the most gorgeous photographs that can be found printed and reprinted again for posters, painting, and canvases is the skyline of lower Manhattan which before the September 11th attacks included the World Trade Center. The World Trade Center was situated at the heart of the city and was well known for its two towers that rocketed above other buildings in the city. They could be seen for miles.

The World Trade Center was actually a complex of 7 buildings, mainly office space, which was all destroyed after the attacks from Al-Qaeda. The towers were both hit by planes that were hijacked by suicide bombers causing them both to collapse. The building known as 7 World trade center collapsed later on during the day and the other buildings had to be destroyed due to the damage. 2,750 people were killed in the attacks and many people were severely shaken by the ordeal.

The most popular tourist attractions are still very appealing to visitors and even after the attacks of 9/11, people from all over the world visit New York every year. It has been reported that roughly 44 to 50 million people visit this wonderful city every year. Even after all its troubles in recent years, it is still a great holiday destination with many tourist attractions, great nightlife, and shopping.

There are ten tourist attractions that most people would have on a list to see if visiting NYC; The Empire State Building, The Statue of Liberty, Grand Central Terminal, Rockefeller Center, Ellis Island Immigration Museum, Staten Island Ferry, American Museum of Natural History, Central Park, The Museum of Modern Art and Times Square. Each of these attractions has its own history which contributes to why New York is so special.

The Empire State building will be celebrating its 80th anniversary on May 1, 2011. It is 102 stories tall, 381m or 1,250ft, and has been named one of the seven modern wonders of the world. This is because it stood as the world’s tallest building for over forty years before the world trade center was built.

The Statue of Liberty was a gift from the people of France to the people of the United States as a sign of friendship. IT is also a universal symbol of freedom and democracy. It stands on Liberty Island and is said to be there to welcome visitors and returning Americans traveling the waters.

Grand Central Terminal is an iconic landmark that has been used as a setting for scenes in movies. Some of these films include; Men in Black, Duplicity, Carlito’s Way, The Taking of Pelham 123, and many more. It is the largest train station in the world.

Rockefeller Center is a complex of commercial buildings which were declared a National Historic landmark in 1987.

Many American families can trace their ancestry through Ellis Island as this was the national federal immigration station. It is thought that over 12 million immigrants passed through here. The station closed in 1954 and after over 30 years of abandonment, the museum was opened in 1990.

The Staten Island Ferry is used by many people, tourists, and commuters. The ferry goes from Staten Island, one of the boroughs of New York, to lower Manhattan. The statue of Liberty and the Harbour can be seen when on the ferry and is a gorgeous sight.

The American Museum of Natural History opened up to the public in 1869 and with new exhibits being shown all the time there is always something different and interesting to see.

Central Park is gorgeous as it is an escape from the madness of city life. It is situated right in the middle of New York City and is visited by millions of people as it has become itself a landmark due to television shows and films. 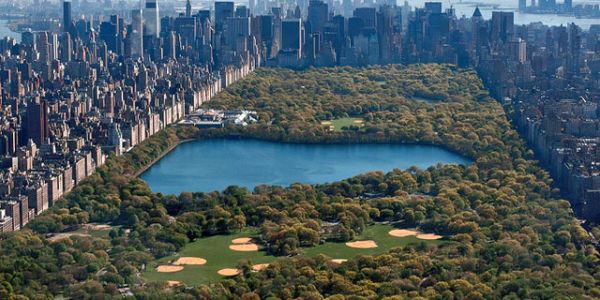 Also known as the MoMA is very diverse as it has many different contemporary pieces housed there. It was founded in 1929 and is still an impressive museum.

Times Square speaks for itself. It is a commercial intersection right beside Broadway. It is an extremely busy part of New York City and is an iconic world landmark.

Each of these ten attractions gives New York such historical value and also gives it the well-known buildings and sights. With hundreds of more fantastic sites, it is a city that is recognized all over the world for its landmarks, shops, and culture. The buzz of the city is portrayed in many films and if approached with the opportunity to visit it would be very difficult to say no.