Most tourists will not want to pass up a visit to the lively and energetic Rockefeller Center.

John D. Rockefeller Jr.’s “city within a city” is a group of buildings that include well-known structures like the notable Radio City Music Hall and 30 Rockefeller Plaza (home to NBC and the Top of the Rock observation deck). Everything is centered around the spacious Rockefeller Plaza. At all times of the year there is plenty to see and do.

Rock Center has a multitude of shopping and dining options. Beware that this is a very expensive part of the city. Expect to pay high prices if you decide to have dinner in this area or plan your timing to avoid it.

1. Walk Around the Outdoor Plaza and Channel Gardens

Rockefeller Plaza is a large, open, pedestrian-only area situated in the middle of the complex of 19 buildings that make up Rockefeller Center.

Perhaps the most famous is the towering GE Building located at 30 Rockefeller Plaza, better known as “30 Rock.” At 872 feet tall, the building offers an unforgettable view of the city from the Top of the Rock observation deck.

About 200 flags surround the recessed Lower Plaza. The flags are normally those of the United Nations member countries except when they are rotated out during the Christmas season and for certain holidays.

The statues and sculptures around the plaza help fulfill Rockefeller’s vision of a contemporary space that incorporates artwork. Perhaps the best known sculpture is Prometheus, a bronze gilded structure in the Lower Plaza.

The Channel Gardens make up a narrow area that connects the Outdoor Plaza and Fifth Avenue. The gardens are situated between two buildings – one called La Maison Francaise and the other named the British Empire Building – just as the English Channel separates France and Great Britain.

The perfectly manicured strip of gardens include fountains, sculptures, and benches to sit on. The gardens change frequently to reflect the season.

Live from Studio 1A in Rockefeller Center

The Today Show is filmed live in Rock Center and airs on NBC every morning of the week. Crowds regularly gather outside Studio 1A to watch the show and sometimes get on TV themselves.

Catch glimpses of anchors Matt Lauer, Savannah Guthrie, Natalie Morales, and Al Roker, and watch the filming in action. Some segments are filmed outside in front of the crowd.

This morning show pays a lot of attention to its visitors, who show up cheering, waving, and holding signs. The cameras often pan across the crowd at commercial breaks and the hosts usually make appearances outside to film segments or meet a few lucky visitors.

You can watch the news program, too. There are plenty of TVs set up that broadcast the show as it happens and a sound system so you won’t miss a thing.

Fuel your Today Show visit with a trip to the nearby Bouchon Bakery. It has pastries, sandwiches, and coffee. If you’re there at the right time, you might be able to grab a seat at the window bar looking out onto the Today Show crowd. It’s a good spot to sit and still get a view of the action.

Remember to dress appropriately for the weather!

3. Have a Sweet Snack at Magnolia Bakery

When Magnolia Bakery opened a location at Rockefeller Center, it was a victory for tourists and locals alike.

Magnolia Bakery is a well known New York City bake shop with irresistible pastel-colored cupcakes. The West Village location has been featured in Sex in the City.

Peer through the window on Sixth Avenue to watch the frosting in action and gain a new appreciation for this art form. You’ll find it hard to resist the dainty cupcakes frosted to perfection.

Grab a cupcake or choose from an assortment of other goodies (like muffins and brownies). There’s no seating but you can eat your treats on the go or take them to Rockefeller Plaza and find a bench.

Magnolia Bakery is located at the corner of Sixth Avenue and 49th Street.

4. Browse Through the NBC Experience Store

The NBC Experience Store is a virtual shrine to all things NBC. Almost anyone who watches the network (and many who don’t) will find the whole thing very amusing. The large store is overflowing with nothing that you actually need.

Browse through T-shirts, DVDs, and other merchandise for the NBC shows you love and some you’ve completely forgotten about.

From a Dwight Shrute bobblehead to a Saved By The Bell waterbottle, you can find some humorous gifts and take a trip down memory lane. These novelties don’t come cheap. T-shirts are $25.

You can get information and purchase tickets for walking tours of NBC Studios and Rockefeller Center at the NBC Experience Store.

The store is located at the corner of Rockefeller Plaza and 49th Street, across the street from the Today Show studios.

5. See New York from the Top of the Rock

For a splurge that is definitely worth it, go to the Top of the Rock, 30 Rockefeller Plaza that is. It is the perfect place to take in Central Park, the Empire State Building, and the rest of the metro area.

The view from the Top of the Rock observation deck is breathtaking and will give you a totally different perspective on the massive city below. From 850 feet above the traffic and commotion, the city looks surprisingly serene.

Which building’s observation deck has the best view of New York City? Compare them at Empire State Building vs. Top of the Rock.

If you are spending Christmas in New York City, Rockefeller Center is a must-see.

The spirit of the holidays fills the air when the outdoor plaza areas are dressed with lights and Christmas decorations, making Rock Center one of city’s seasonal highlights. 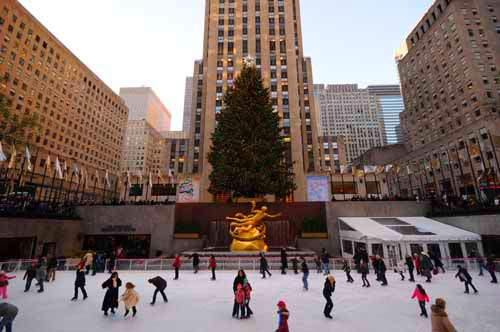 Radio City Music Hall, at the west side of Rock Center, is the venue for the famous Radio City Christmas Spectacular, a show featuring the Rockettes. This extraordinary Christmas performance appeals to all ages and is a perfect family activity.

Rockefeller Center is located in Midtown Manhattan on the blocks between 48th and 51st Streets and between Fifth and Sixth Avenues.