There is never a dull moment in New York City sports! The city is home to numerous professional sports teams. It doesn’t matter when you decide to visit – there’s always a good game to see in NYC! 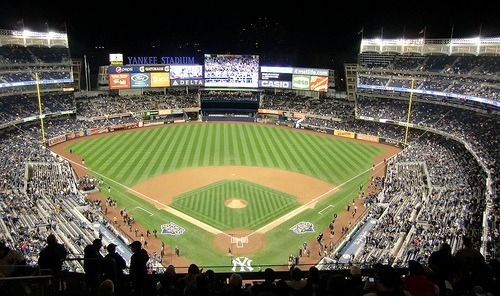 Yankee Stadium, Photo Courtesy of Shawn Collins
Few topics are woven into the fabric of New York City culture as deeply as New York City sports. A little knowledge of NYC sports teams will help you bridge the silence with your hotel doorman, earn the respect of your taxi driver, and arm you with the ability to converse with even the hardest New Yorker.

New York City sports teams play at stadiums and arenas in both New York and nearby New Jersey. Most of the arenas are spacious, up-to-date, and have been built in the past five years.

Yankees or Mets? Jets or Giants?

The New York metro area is the only place in the United States that has more than one professional team for baseball, basketball, football, and hockey. The intercity rivalries can be fierce. Many New Yorkers have lifelong loyalties for the teams they support, making for heated discussions around the city!

Baseball is so heavily followed that it qualifies as the most popular New York City sport. With two Major League Baseball teams, the Yankees and the Mets, there is plenty of intercity rivalry to go around.

The New York Yankees are one of the hottest and most talked about teams in Major League Baseball. They have won 27 World Series championships, more than any other MLB team. The Yankees’ last World Series victory was in 2009. The team plays at the new state-of-the-art Yankee Stadium, which opened in 2009.

The Mets have played in the World Series four times and won twice. Their most recent victory was in 1986. They began playing at their new stadium, Citi Field, in 2009. The Mets haven’t experienced as much success as the Yankees but are still a deep-rooted New York team with a loyal following.

Home of the New York Mets, this impressive sports venue replaced Shea Stadium is 2009. An open-air ballpark with a capacity of 41,800, Citi Field boasts many amenities and state-of-the-art design elements.

Citi Field is very fan-and family-friendly, featuring several party decks, an outfield picnic area, and dozens of tasty dining options. A restaurant in the left field offers field-view seating. The ballpark is equipped with a state-of-the-art sound system and video boards. While there are 15,000 fewer seats than Shea Stadium, the Citi Field seats are roomier with more legroom.

Mets Hall of Fame and Museum

Fans can browse through lots of neat baseball memorabilia and interactive exhibits at this museum, which is located next to the Jackie Robinson Rotunda. Highlights include the ball that Bill Buckner missed in the championship.

New York City football, which kicks off every September, is very popular in the fall. An all-American sport, football is heavily followed throughout the country and New York is no exception.

The city has two National Football League Teams, the Jets and the Giants. Both New York City sports teams play at the same stadium in East Rutherford, New Jersey, just outside of New York City. There is a long-standing and intense rivalry between the two teams.

The Giants have made numerous Superbowl appearances and won the championship in 1987, 1991, 2008, and 2012. The Giants’ 2008 Superbowl win came with a surprising and emotional ending when they scored a touchdown in the game’s final seconds, upsetting the undefeated New England Patriots who were persuing the NFL’s first perfect season. In the 2012 Superbowl, the Giants won another exciting game over the Patriots.

Although historically the underdog to the Giants, the New York Jets have a dedicated following and remain a popular New York City sports team. The Jets have won one Superbowl, in 1969. They have seen success in the past decade, making it to the playoffs six times since 2000.

New York City basketball is a sport that gets a lot of attention each winter.

The NYC area has two National Basketball Association teams, the Knicks and the Nets. The Knicks play in the middle of Manhattan while the Nets play in Newark, New Jersey.

New York is also home to a WNBA team, the New York Liberty.

The New York Knicks are a charter member of the NBA and a well-known New York City sports team. The Knicks get their name from the word “knickerbocker,” which refers to the style of pants worn by Dutch settlers to the New York City area. The Knicks have made many appearances at the the NBA Championships and won in 1970 and 1973.

The Brooklyn Nets, formerly the New Jersey Nets, won the American Basketball Association Championships in 1974 and 1976 before the ABA merged with the NBA. In the years 2002-2006, the Nets and won the division title four times and the conference title twice. In 2012, they got a new start by moving to New York and becoming the Brooklyn Nets.

The New York Liberty is New York City’s only Women’s National Basketball Association Team. The team plays at Madison Square Garden. The Liberty has been in the WNBA Championships numerous times since they were formed in 1997, but have not yet won a championship.

Although hockey trails baseball, football, and basketball in popularity, there is a large following for this fast-moving and physical winter sport.

The New Jersey Devils have been around since 1982, when a Colorado-based team moved to New Jersey and became known as the Devils. The Devils won the Stanley Cup in 1995, 2000, and 2003.

New York has one Major League Soccer Team, the New York Red Bulls. The team was one of the founding members of MLS, although they have gone by the name Red Bulls only since 2006.

Be part of the action and the fun. Treat your family to the excitement of a live game! See what New York City Sports Tickets you can find.