To see New York City theatre is to see some of the best theatre in the world. The city has defined itself as a center for culture and performing arts and attracts extraordinary talent from all over. Whatever your taste in shows, there is sure to be a performance you will enjoy.

Broadway is often the first thing that comes to mind when people think of New York City theatre. 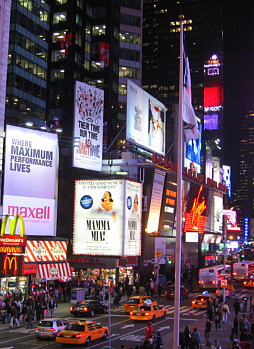 To use an analogy, Broadway is to theatre as the Olympics are to sports. Most major cities have good theatre but Broadway in New York City is arguably at the very top.

The only other thing in the world that is on par with Broadway is London’s West End Theatre.

Lincoln Center for the Performing Arts

Broadway isn’t the only show in town when it comes to great New York City theatre. Lincoln Center is a true leader in the performing arts arena. The 16 acre complex of elegant performance venues is located on the Upper West Side of Manhattan.

Here is just some of what Lincoln Center has to offer at its 22 New York City theatre performance venues:

The Lincoln Center experience is special from start to finish. The performance venues and concert halls at the world’s leading performing arts center are gorgeous, pristine, and state-of-the-art. You will likely want to hang around long after the performance is over, enjoying the atmosphere and taking pictures.

The Metropolitan Opera is one of the world’s premier opera companies and attracts outstanding talent. Famous names like Luciano Pavarotti and Placido Domingo can be associated with the Met Opera.

The city’s second largest opera (after the Met) has served as a launching pad for the careers of many young stars. City Opera has gained a reputation of being more audacious that the traditional Met Opera and has cheaper tickets too.

The New York City Ballet is one of the world’s leading dance companies. Most of the works performed by the company were choreographed by George Balanchine, the famous pioneer of American ballet and co-founder of the NYC Ballet.

The New York Philharmonic was founded 1842, making it the oldest symphony orchestra in the United Stations. This orchestra is widely acclaimed and gives performances around the U.S. and the world.

One of the best things to do in New York is to experience New York theater. There are always many amazing plays to choose from; you are sure to find something to please all tastes. For more information on showtimes and ticket prices please click here. Below is an overview of all of the shows both on and off-Broadway.