Falafel is a huge favorite among vegetarians, and this Middle Eastern bite is famous all over the world as a really delicious snack that is healthy and filling as well. Usually, people grab a falafel during lunch hour when they don’t have the time for a proper meal. Or, they could be en route to an important meeting that’s probably going to occupy them for a while and falafel will keep them going till they are able to fill up their nutritional tanks again.

Those who love Falafel absolutely love it and those who don’t can’t figure out why the world around them is going crazy over it. No one can really explain it to them. It’s only when they bite into a crunchy falafel and taste the moist chickpea patty and feel the dressing dribble down their chins…that’s when they come close to the bliss of having eaten one of the finest fast foods man has created. 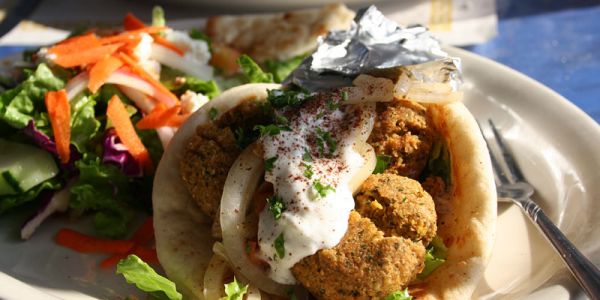 Having spiked your interest in falafel, it is time to take you around the city and introduce you to some of the best places that serve unforgettable falafel.

Let’s begin with Azuri Cafe on 51st Street near 10th Avenue. Run by a native of Jerusalem, this Kosher cafe puts before you the tastiest and freshest falafel in Manhattan. Or so the patrons of this place claim. We understand how it is when you have a favorite. But, there is a lot of substance in what they say. Step into Azuri, ask for falafel, and what appears before you is a delicious bounty of Israeli delicacies stuffed into freshly baked pita bread. Tabbouleh, red cabbage, and Baba Ganoush are mixed with red pepper and hummus to complement the falafel balls that are perfectly spiced and fried to perfection. All this is topped off by tahini, green sauce, and sour pickle spears. Heavenly!

Next in line to stake a claim to fame is Taim at 222 Waverly Place. Translated Taim means “tasty” in Hebrew and this “bright and cheerful West Village falafel shack” attempts to zealously live up to its name. What’s special here? Their falafel balls come in three different flavors: one is streaked with roasted red peppers, another is infused with harissa (a mildly spicy North African red chili paste); while the third one, which is a hot favorite, has got a hint of three herbs – cilantro, mint, and parsley. You can have them individually, or if you are in an adventurous mood, try them in a mixed platter with tabbouleh, tahini-dappled hummus, and Israeli salad. You’ll be begging for more soon enough!

And more is what we have for you. This journey ain’t over by a long shot! After all, we’ve only just begun…we’re going to be back with the rest of our top picks. Till then wait in animated suspense or better still, head off to Taim or Azzuri Café, and sample some great falafel. See you in a bit!

And, we are back, just like we promised! You didn’t think we would let you down now, did you? Picking up from where we left off last time, let’s continue the journey of discovering the greatest falafels in New York.

If you’re looking for the best falafel in New York City, you have to check out Mamoun’s Falafel. This classic spot has been around since 1971 and is still serving up delicious falafel sandwiches. The falafel is made with freshly ground chickpeas and spices and served in a warm pita pocket with lettuce, tomatoes, pickles, tahini sauce, and hot sauce. It’s a great balance of flavors that will leave your taste buds wanting more.

In fact, it is among the first few Middle Eastern establishments in the United States, and it is the oldest falafel restaurant in New York. Located in the heart of Greenwich Village, Mamoun’s has become an integral part of the culture and history of this place and the whole city.

Several celebrities, musicians, and actors have declared their undying loyalty to this restaurant and on their part, Mamoun’s takes its business very seriously and lives up to its philosophy of “authentic Middle Eastern Cuisine served in a traditional environment.” The food here is made from scratch using nothing less than the finest and freshest natural ingredients, and dining here becomes a memorable experience in itself.

Another great place to get falafel in NYC is Taim. This Israeli-style eatery offers up both traditional and vegan falafel options. Their signature falafel sandwich comes with hummus, tahini sauce, cabbage salad, pickled cucumber, and carrots all wrapped up in a warm pita pocket. It’s definitely worth the trip to the West Village to try it out!

Next in line is Pita Joe at 2 west, 14th St. between Fifth and Sixth Aves. They may not be able to boast of history like some of their more esteemed competitors, but their food has people singing praises. Yet another reason why this place is so famous is that its focus is on health, and they use organic chickpeas, flour, and eggs. You are bound to spot fitness freaks and ladies just out of their gyms clad in workout gear and grabbing a plate of falafel salad. Their falafel is nice and light and they don’t feel like boulders in your stomach.

The last one we are going to look at is Maoz at 38 Union Sq. East. It broke the long-standing monopoly of Rainbow’s restaurant and very soon, their cheerful green-and-white façade began to draw in crowds of people who flocked eagerly to the all-you-can-stuff-in-your-pita signature salad bar and proceeded towards the spotless stainless-steel roughage trough where they could take their garnishes into their own hands.

The falafel balls are small in shape, sinfully crisp to bite into, and have a nutty flavor to them. At the salad bar, you can choose from roasted cauliflower, pickled baby eggplant, herb-dappled couscous, and sun-dried tomatoes. Maoz scores over the other falafel joints in that it offers a choice of white or whole wheat pitas and sizes, the five-falafel regular and three-falafel junior.

NYC’s Falafel scene is a vibrant and diverse one. From the classic street carts of the East Village to the more upscale establishments of Midtown, there truly is something for everyone. Whether you’re looking for a quick snack or a hearty meal, there’s no shortage of places to choose from. Our picks are sure to please even the most discerning connoisseur.

Well, that concludes the journey of the best Falafel joints in NYC. These are just among the top ones and there are several more you can spot in each corner of New York. That’s a whole new journey that you are going to have to take all by yourself. And in case you come across a joint that’s noteworthy, drop us a line and educate us too.

“I love Falafel, but hate frying too. I make fried falafels, that’s quite a dietary problem and surely messing. I agree baking it’s a good untraditional alternative!”