Joseph Bonanno was born on January 18, 1905, in Castellammare del Golfo, Italy. He came from a well-to-do, powerful family but lost both his parents at an early age. He was an orphan by the age of 16

He was a man of many different sides. He was the boss of the Bonanno crime family for close to 30 years, he is also one of the few bosses allowed to retire or who wasn’t killed by others or those in his own family. He also published his memoirs toward the end of his life. His book was later read and used by up-and-comer Rudolph Giuliani to later attempt to dismantle organized crime families as well as lead authorities to a better understanding of how some families were structured. 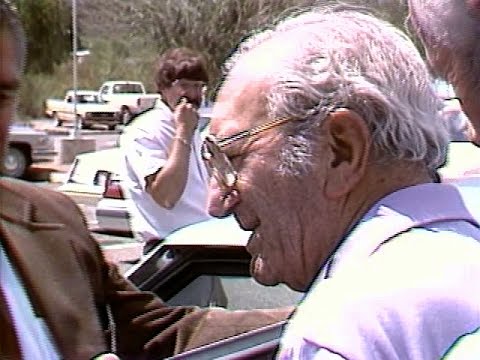 In 1908 Bonanno moved to Brooklyn with his family, into an area where other Sicilians also lived. His father opened two businesses. A pasta factory and a tavern. Here Bonanno’s father was quickly recognized as a man of honor and was referred to by others in the neighborhood as “Don Turridru.”

By the age of 7, Bonanno would move back to Sicily after a short stay in America. He later said this might have been because of a clash with another rival family in Italy. The family may have been moved for their own safety. After returning to Sicily, Bonanno’s father was drafted into the Italian army and fought and was wounded while on the front in Austria, in World War I. He died of his wounds shortly after returning home in December of 1915. His mother would die five years later leaving him an orphan.

around the age of 16, he took what he needed from his inheritance and went to Trapani to a naval preparatory school for one year before going on to Joeni Trabia Nautical Institute in Palermo. He wanted to be a leader of men. He later would be, but not in the way he thought. As Benito Mussolini began his rise to power in the early twenties, Bonanno who was anti-Mussolini was suspended from school when it was found out that he was an anti-fascist activist. He had to flee or risk being captured and tortured by Mussolini’s forces.

In 1924, Bonanno decided to come back to America, he entered the country illegally from Cuba into Florida. He was later bailed out of a detention center he had been sent to by friends in the United States. He ended up coming to Brooklyn and staying with relatives for a brief time before going on his own.

Bonanno quickly decided to get involved in bootlegging as many others were doing and getting rich doing it. He was also arrested during this time for gun running but the charges were dropped. Bonanno also showed his business acumen during this period, further expanding the family’s businesses and his own bootlegging and rum running operations.

After a time, Bonanno came to the attention of one of the most powerful bosses in New York City at that time. Salvatore Maranzano. He began to work as an enforcer for Maranzano and would later run some of his bootlegging operations. Bonanno would also be invaluable to Maranazano in the upcoming conflict he would have with Giuseppe Masseria his main rival in New York. This war was called the “Castellammarese War”. At the end of this war, Lucky Luciano would be all-powerful after he killed both Masseria and Maranzano within six months of each other.

Soon after this time, Bonanno married his long-time sweetheart Fay Abruzzo and had three children. Salvatore, in 1932, Catherine in 1934, and Joseph Jr. in 1945. Bonanno suffered some health concerns having a heart attack in 1951in Arizona where the family later would buy a home to be near their son who was in boarding school out there for a while. In 1945 Bonanno also became a U.S. Citizen, something he would almost lose in 1953 when the government sought to void his citizenship, claiming he lied about a 450-dollar fine he was issued at one of his garment businesses in the 40′s. The case was later dismissed.

in 1956, two of New York’s five families were united in marriage when Bonanno’s son Bill wed mob boss Joseph Profaci’s niece Rosalie Profaci. It was a huge wedding with thousands of guests. Bonanno spared no expense on this wedding bringing two of the city’s five families closer together than they had ever been. The wedding was held at the Astor Hotel and had a who’s who of entertainers including Frank Sinatra and Tony Bennett. The reception was attended by over 3000 people as well as mob notables like Albert Anastasia, Frank Costello, Vito Genovese, and others.

Joseph Bonanno unlike his counterpart Lucky Luciano kept a low profile, it wasn’t until 1957, in the fallout of the Albert Anastasia murder and subsequent Applachian meeting that turned into a debacle that Bonanno ran into trouble. He was briefly arrested after the Appalachian meeting which he hadn’t even attended. He was charged with conspiracy to obstruct justice in 1959 and indicted. He never stood trial for this charge, a second heart attack got the case dismissed or he may have had inside help, that is unclear but the government dropped the charges against him.

Over the years Joseph Bonanno strived for credibility and respect. He opened other legitimate businesses such as a cheese factory and an undertaker’s business. It was later alleged it was Bonanno who created the “Double Coffin”, a special coffin that was set up so that another body could be placed under the original body in the casket, thus getting rid of two bodies instead of one.

In 1963, Bonanno was named by Joseph Valachi in his testimony before a senate subcommittee as one of the major crime bosses of the five families. Bonano’s problems with the law would be compounded after a later trip to Canada where he was arrested for lying on his immigration card application again. After spending several days in a Canadian prison he was released and no charges were filed. This was his first experience being locked in Jail and he would later say this experience was very unnerving to him.

On October 21st, 1964, Bonanno was allegedly confronted and abducted by two armed men. He was soon to have to testify in court before a federal grand jury. Some hypothesized it was actually Bonanno who had himself kidnapped, the F.B.I. seemed to think that he was kidnapped to stop the power struggle within organized crime that had been going on for some time. Bonanno in his autobiography claims he was kidnapped by men working for his cousin Steffano Maggadino whom he was estranged from for some time. It is alleged by Bonanno that Maggadino was working with the Lucchesse and Carlo Gambino. After being held for several weeks he was released, some say he had to promise to retire from organized crime in order not to be killed by his captors. That story however is not verified. Right after his release, he appointed his son Bill as his second in command, a move that angered many in the family who saw Bill as someone of privilege and who had not earned his stripes on the street. After being released Bonanno went into hiding. His son Bill and others tried to hold the family together. The commission had appointed long-time friend and confidant Gaspar DiGregorio to run the family in Bonanno’s absence but apparently, Bonnano did not accept the commission’s ruling. The fight between these two forces came to be known as the “Banana War”. Bonanno’s son Bill narrowly escaped being killed in January 1966.

In May of 1966, Joseph Bonanno came out of hiding and surrendered himself to authorities to face the obstruction of justice charges he had leveled against him in 1964 for failing to appear in front of a federal grand jury that at the time was investigating organized crime. This charge was later postponed indefinitely in 1971.

In 1968, Bonanno had his third heart attack and purportedly retired to Tuscon Arizona where the family had a home. Bill had attended boarding school there as a youth. Paul Sciacca took over the Bonanno Family at this time. Bonanno is one of the few family heads ever allowed to retire. It was a rare thing. Later that year Bonanno’s home was damaged by a bomb. It was later alleged this bomb had been planted by the F.B.I. to further stir up organized crime tensions between families.

Bonanno had to deal with close F.B.I. scrutiny even after retirement. In 1980 he was arrested on charges of obstruction of justice charges in relation to a money laundering scheme that was run by his two sons. He was later found guilty of conspiracy to interfere with a grand jury. After some health delays, he was sentenced to five years in prison. The sentence was later reduced and he only served 8 months in prison, beginning in December of 1983. This was his first offense for which he did any kind of extended prison time.

In the same year, 1983, Joseph Bonanno did what no other boss had done before. He released his memoirs. The book was entitled “A man of Honor.” The book was co-written with writer Sergio Lalli. The book played up his Sicilian roots and its traditions while also touting his business acumen. In the book, Bonanno does admit to bootlegging, loansharking, and other traditional mob rackets. He does not admit to his family that he was one of the principal providers of Heroin in the United States in the late sixties and 70′s periods. Many have alleged it was Carmine Galante, a high-level capo in the Bonanno family who secured many of the drug pipelines that fed the family’s heroin business. Bonanno denied in his book that his family ever dealt with prostitution or narcotics sales. Both of these rackets, in fact, the family did profit from.

Bonanno’s book caught the eye of many Americans who are fascinated by organized crime figures. The book also came to the attention of Rudolph Giuliani, who would use what he learned in the book to go after other families. In 1985 Giuliani and Michael Chertoff wanted Bonanno to testify about the commission in a case they were trying. Bonnano’s lawyer argued his client was in ill health and could not testify. Bonanno was locked up for 14 months in a federal medical facility for refusing to testify. In November of 1986, he was released and went back to his home in Tuscon.

Bonanno’s 90th birthday celebration was quite an affair drawing many notable people including Gay Talese and others, over 300 people attended the event. In 1999 Showtime aired a show entitled Bonanno “A Godfather’s Story”. Several actors played Bonanno in different stages of his life including Martin Landau and the show was produced by his son Bill.

Shortly after the release of Bonanno on Showtime, Bonanno suffered a stroke and his health quickly declined. He died on May 11th, 2002. He will be remembered for leading one of the original five families through tumultuous times and was one of the few bosses ever allowed to retire with no consequences