The Metropolitan Life Insurance Company Building, also referred to as the Metlife Tower, was the tallest building in New York for four years, from 1909 to 1913. Today it reminds us of the grandeur and opulence that was so often associated with the early twentieth-century New York City.

The interesting thing is that the original Metlife headquarters on Madison Avenue at 23rd Street was a rather simple and modest-looking building and it was constructed in 1893. However, in 1907, the president of Metlife Insurance, John Rogers Hegeman, wished to celebrate the unparalleled success of the company and their newfound status. Therefore, he hired Napoleon LeBrun and Sons, a celebrated architecture firm to design a magnificent marble office tower. This tower was meant to be the king among all the skyscrapers that had started coming up in the city. 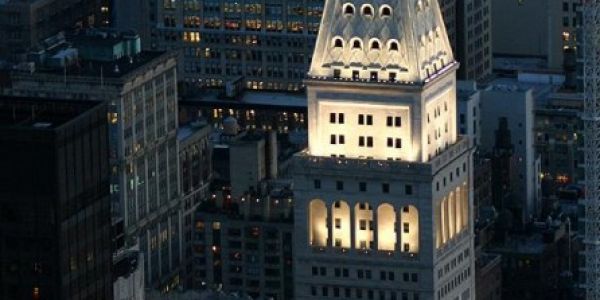 This new tower addition was located atop the northwest portion of the existing building and it was modeled after the St Mark’s Campanile in Venice. On each of the four sides of the tower, there are 4 four-story clocks which are the Italian Renaissance in style. The timepieces are encircled in flowers and wreaths.

In the 1960s, there were a few renovations in the Metlife Tower that left leading architectural experts scandalized. The marble portions of the tower were replaced with limestone and much of the original Renaissance ornamentation that lent the building its distinctive grandeur was removed.

In more recent times, at the turn of the 21st century, there was yet another period of renovation. The Metlife tower’s cupola was re-gilded and this time they used 23.75-carat Italian gold leaf. The Tuckahoe marble facades that had developed cracks were replaced and so were the white and turquoise tiles on the clock faces which had got damaged. The lighting system has also been revamped and new and improved technology took the place of the one that was being used earlier. After spending $30 million, a fresher and more dynamic face of the Metlife Tower was unveiled to the public.

The best time to see the effect of this expensive facelift is at nightfall. The new lighting system works brilliantly and the Metlife Tower shines like a jewel in the Manhattan Skyline. With this new lighting system, it is also possible to light the building in holiday colors whenever needed.

The Metropolitan Life Insurance Company building is truly one of the most historic buildings in New York City.