Many tourists use taxis as their primary or only form of transportation when visiting New York. This is not necessary because the New York City subway system is excellent and many tourists have navigated the subways successfully. Even so, visitors often prefer taking cabs over dealing with the crowds and extra work that the subway requires.

Tips for Hailing a Taxi Cab

In New York City, your best bet for getting around is probably to use the city’s subway system, bus system or any of its other public transportation methods.

That said, in the rare circumstance where you will actually want to take a taxi (it’s late at night, you’ve got a lot of luggage or you’re really far from a subway station), you’ll need to know how to call them.

Unlike most other cities, it’s difficult to prearrange a taxi pickup in New York City. Your best bet is to “hail” one off the streets using your hands to catch their attention.

To tell whether a cab is available or not, take a look at its roof lights. On the top of yellow cabs there are always three lights: a light with a medallion number and two “off-duty” lights, on either side of that number.

How to Hail a Cab

To hail a cab, walk a safe distance into the street, make eye contact with the cab driver and extend your hand.

You do not need to whistle, show some leg, wave frantically or perform any other ridiculous shenanigan that mainstream television would lead you to believe.

If the area that you are trying to pick up a taxi in is especially crowded, walk a couple of blocks to a less congested area and try to get a cab there. This will usually be faster than waiting your turn in a crowded intersection. 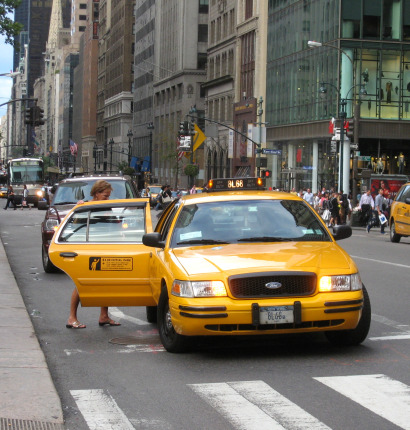 Taxis are easier to catch on large avenues than small side streets. If the light at the top of taxi is lit, then the taxi is empty. If it’s off, the taxi is occupied and therefore not available.

Once you have successfully hailed a cab, just hop in and tell the driver where you want to go.

This is best communicated by giving the driver an intersection (example: Sixth Avenue and 34th Street) rather than a hotel name or street address. Giving the name of a well-known landmark (like the Empire State Building or Rockefeller Center) works well too.

Overall, taxi drivers seem reasonably skilled at getting around the city and generally try their hardest to get you to your destination fast.

Cons of the NYC Taxi

Taxis aren’t always the best way to travel in New York City. Some notable disadvantages include the following:

Pros of Taking a Taxi

So Why Take a Taxi? New York City taxis do have their place. Taxis can be good for the following situations:

There is a standard metered fare for all travel within New York City. The fare accrues during the ride and is computed by a taximeter located inside each taxi.

Here are a few criteria for how the fare is calculated:

New York taxis accept cash and credit/debit cards. Although they used to be notoriously cash-only, taxis are now outfitted with machines that accept credit and debit cards. The tip can be added to the card as well. The card machines are located in the rear part of the cab where the passengers sit.

As for tipping, 15-20% is the standard tip for NYC taxi drivers.