The High Line is an elevated urban park that opened in 2009. This 1.45-mile-long public green space was made to create harmony between nature and The City That Never Sleeps, running through Chelsea and offering beautiful views of the New York Harbor, Lower and Midtown Manhattan. Click to book your Meatpacking District/Chelsea Market/The Highline walking tour.

Specializing in landscape architecture, James Corner Field Operations took a leading role in turning the abandoned infrastructure of the High Line into a pleasant public park. Diller Scofidio + Renfro was also hired to provide some valuable input. Headquartered in NYC, both of these firms had personal and commercial ambitions for the project.

Having world-renowned skills in urban garden design, Piet Oufold from the Netherlands was also called in to transform the rail system into a beautiful space. All of the individuals involved in the planning envisioned a unique park that would create harmony between nature and the dense layout of the Big Apple. 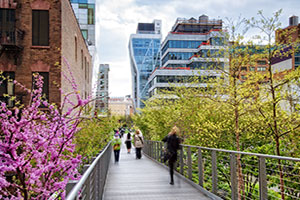 Running for just under 1.5 miles, the elevated boardwalks and promenades on the High Line provide great views of Lower and Midtown Manhattan. From some points, you might be able to see the Hudson River and the skyline of Jersey City and Hoboken in NJ. The sustainable design of the park incorporates small gardens that are typically seen on rooftops of some green buildings in NYC and other major cities worldwide. Most of the plants in these gardens are native species. You’ll even see shrubs, grasses, flowers, and weeds that originally covered the rail tracks during the years of neglect and abandonment of the freight operations.

Overall, there are more than a dozen distinct points that are strategically scattered along the High Line. For example, the Diller – von Furstenberg Sundeck has comfortable chairs and shallow pools. The 10th Avenue Square and Overlook offers unobstructed views of the New York Harbor. Some other interesting sites at the High Line include Chelsea Thicket, 23rd Street Lawn, and Pershing Square Beams.

In the early 20th century, Lower Manhattan was a major hub for manufacturing and other industries. The High Line was built to accommodate the increased rail traffic in one of the busiest parts of the borough. The tracks of this line were seamlessly connected to other existing tracks that had access to the national rail network.

After World War II, the automotive industry led to a rapid decline in rail freight transportation. By the 1960s, portions of the High Line were permanently shut down. The 1980s marked the slow and inevitable decline of this historic rail line that seemed out of place in a neighborhood that was dominated by vehicular traffic. There was increasing pressure to permanently close the tracks and demolish any remaining infrastructure.

Fascinated by the rich history of NYC’s rail systems, Peter Obletz resisted the demolition of the High Line in his neighborhood. He even engaged in legal battles to keep the historic rail line in place. The Friends of the High Line eventually formed as an institution to preserve the High Line for the public.

At the beginning of the 21 century, photographer Joel Sternfeld took captivating pictures of the High Line, which had been overtaken by self-seeded shrubs, weeds, and other plants. These images displayed an unusual and beautiful combination of urban decline and natural encroachment. The stunning photos ultimately sparked the full renovation and transformation of the High Line into a public green space.

The northern end of the High Line is situated at the corner of 34th Street and 11th Avenue in Midtown Manhattan. For several blocks, the park has a U-shaped layout that ultimately aligns itself and runs parallel to 10th Avenue. Most of the elevated infrastructure of the park cuts through the heart of the Chelsea neighborhood. The southern end of the High Line is marked by Gansevoort Street and Washington Street. Additionally, the Whitney Museum of American Art serves as a notable reference point for the park’s southern tip.