Times Square in New York City is a place like no other. This famous intersection has earned the nickname “Crossroads of the World” and is one of New York City’s most popular tourist attractions. 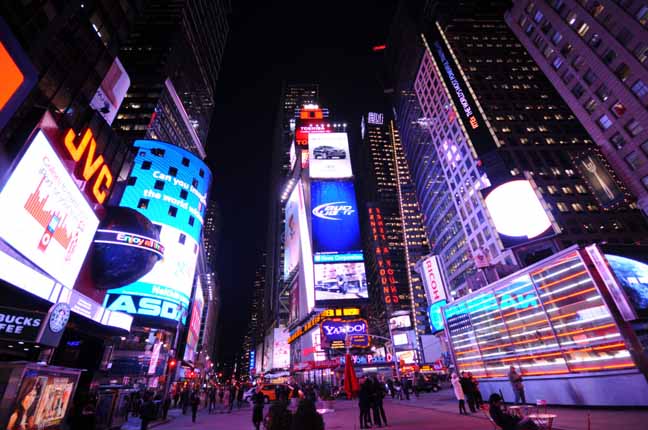 In many ways, standing in the middle of Times Square New York City really does feel like being in the center of it all.

It is one of the most well-known and busiest sections of Manhattan, with an incredible collection of tourists, street vendors, entertainers, and yellow taxi cabs each day of the year. No matter where you go in New York with one of our cheap car rentals, you should definitely pass through Times Square to find out what all the fuss is about!

Scrolling tickers report the world’s latest news and stock quotes. Jumpotrons flash giant illuminated ads for companies like Coca-Cola, Toshiba, and Samsung. Taxis fly by. People crowd every street corner. There is so much going on, it’s hard to take it all in.

Times Square in New York City truly embodies the “city that never sleeps” notion. Some times of the day are calmer than others but this place is “on” 24 hours/day.

Even for people who find Times Square a bit much for the senses, it’s worth visiting this energetic hub, if only briefly.

Because of its location in the middle of the Theatre District of Midtown Manhattan, a walk through Times Square can easily be combined with going to see a Broadway Show.

Don’t Miss the View from the Top of the Glass Staircase!

The TKTS booth is located in the middle of Times Square. Besides being a great place to buy discounted Broadway tickets, the glass “bleacher style” staircase above the TKTS booth provides one of the best views of Times Square. Climb the 27 steps for a panoramic view of the area. Accessing the stairs is permitted until 1 a.m.

Times Square is now more pedestrian friendly! The city recently closed down Broadway from 42nd to 47th Streets to make a pedestrian plaza that has tables and chairs. You can now sit down to enjoy a moment’s rest (if rest is possible in Times Square) or have a snack. 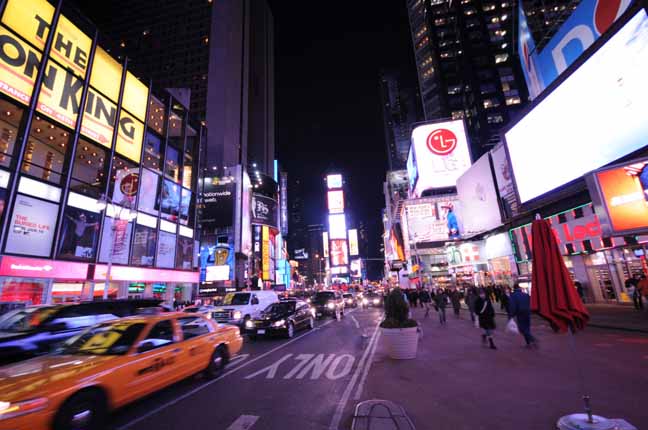 It’s more photography friendly too. You no longer have to stand in the middle of traffic to get a great shot!

Times Square has many restaurants, including familiar chains. Because of the large number of tourists in this area, the prices can be high.

Instead of eating in the immediate vicinity of Times Square, we recommend walking west two blocks to Ninth Avenue. This avenue, in the area known as Hell’s Kitchen, is lined with cute and reasonable restaurants.

The Times Square business improvement district is also seeking companies interested in providing a delivery service from nearby restaurants to the plaza seating. Revenue from both the food concession and the delivery service would be used to help maintain the plazas.

But unlike Shake Shack, which helped revitalize Madison Square Park, no permanent, full-service restaurants will be able to set up shop in Times Square. But with 350,000 visitors daily, the plazas may rank among the most lucrative outdoor dining locations in the city perhaps in the world.

Times Square Crossroads of the World

Times Square is a major intersection in Manhattan, at the junction of Broadway and Seventh Avenue and stretching from West 42nd to West 47th Streets. Know as the crossroads of the world. The Times Square area consists of the blocks between Sixth and Eighth Avenues from east to west, and West 40th and West 53rd Streets from south to north.

Originally known as Longacre Square, Times Square was renamed after the Times Building (now One Times Square) in April 1904. Times Square, the “Crossroads of the World,” has achieved the status of an iconic world landmark and has become a symbol of New York City. Times Square is principally defined by its spectaculars, animated, digital billboard advertisements.

A little know fact is that the intersection of Broadway and 42nd Street, at the south-east corner of Times Square, is the Eastern Terminus of the Lincoln Highway, the first road across the United States of America.

In 1992, after years of decline and a stint as one of New Yorks seediest neighborhood the Times Square Alliance (formerly the Times Square Business Improvement District, or “BID” for short), a coalition of city government and local businesses dedicated to improving the quality of commerce and cleanliness in the district, started operations in the area. The breakthrough came when Walt Disney took over and renovated and derelict theater.

Times Square now boasts attractions such as ABC’s Times Square Studios, where Good Morning America is broadcast live, an elaborate Toys “Я” Us store, and competing Hershey’s and M&M’s stores across the street from each other, as well as restaurants such as Ruby Foo’s (Chinese food), the Bubba Gump Shrimp Company (seafood), Planet Hollywood Restaurant and Bar (Theme Restaurant) and Carmine’s (Italian) along with a number of multiplex movie theaters. It has also attracted a number of large financial, publishing, and media firms to set up headquarters in the area.

Times Square is located in the Midtown area of Manhattan and is centered around the intersection of Broadway and Seventh Avenue.