Bryant Park is just the place for taking a well-deserved break while visiting the many tourist attractions in Midtown Manhattan. This welcomed patch of green space is a true urban park, bordered on every side by towering buildings.

Just When You Were Looking for a Place to Sit Down…

The park is in a very convenient location, right behind the New York Public Library and almost centered between Times Square, the Empire State Building, Grand Central Terminal, and Rockefeller Center. It’s also close to the many popular department stores of Midtown. 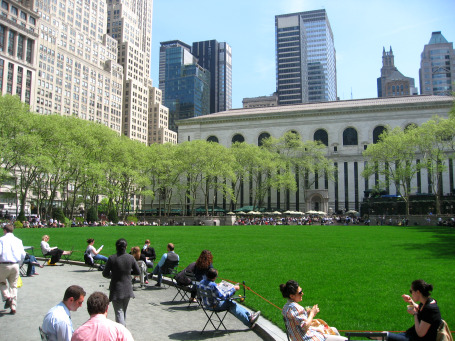 Bryant Park is beautifully maintained and well-landscaped throughout the year. A peaceful haven situated between skyscrapers, it is a Midtown treasure. Because it’s the only park around, it’s a popular spot for meeting and eating. The park also has free WiFi and clean public restrooms. 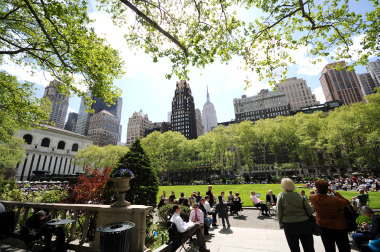 It can also be the perfect place to get out your map and plot your next move  while lounging comfortably in a chair or sprawled out on the grass of course.

Lunch with the Locals

The lawn in the middle of the park is as long as a football field.

On sunny weekdays, thousands of office dwellers spill out from the nearby buildings to get a little fresh air during their lunch break. Tables and chairs are set up seemingly everywhere to accommodate the large crowd. 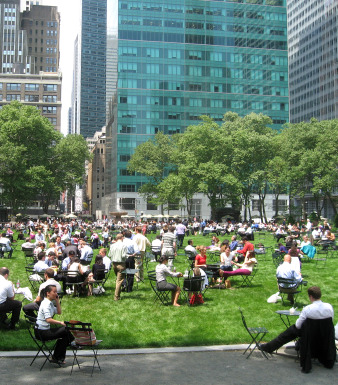 There are several eateries inside the park (check out the Bryant Park Grill, Southwest Porch, or ‘witchcraft) and others on the streets bordering the park. So pick up your lunch, stake out your table, and dine like a Manhattanite!

The park is on the block between 40th and 42nd Streets and between Fifth and Sixth Avenues. It is behind the New York Public Library.