Skyscrapers and New York City go hand in hand, and the spectacular Woolworth Building has been an iconic landmark in Manhattan’s skyline since the early twentieth century. Funded by the original five and dime king Frank W. Woolworth, owner of the retail chain of discount stores bearing his name, the Woolworth Building was completed in 1913 and is one of the oldest skyscrapers in the city. At 792 feet, the impressive structure remains one of the tallest and most famous buildings in the United States and was named a National Historic Landmark in 1966. 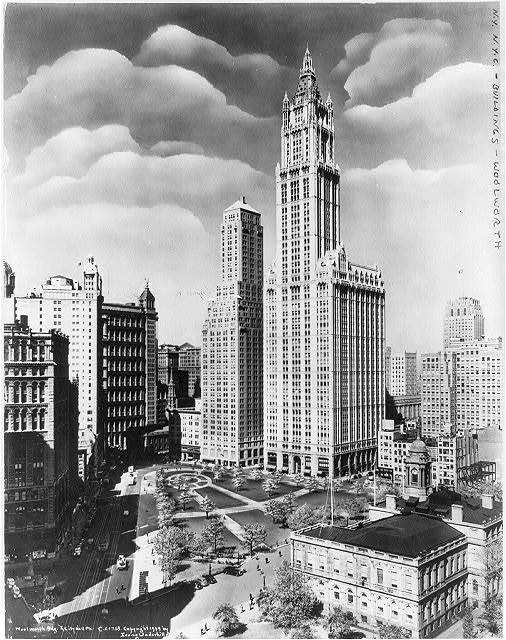 The Woolworth Building was constructed in neo-Gothic style by architect Cass Gilbert, who was commissioned by Frank Woolworth in 1910 to design his company’s new corporate headquarters. It was to be located on Broadway, between Park Place and Barclay Street in Lower Manhattan, opposite City Hall. The Woolworth Building opened on April 24, 1913. Although originally planned to be 625 feet (190.5 meters) high, the building ended up at to 792 feet (241 meters). It cost US$13,500,000 and Woolworth paid for it in cash.

With a height of 792 feet, the Woolworth Building was the tallest building in the world from 1913 to 1930. It is still one of the top 100 tallest buildings in the United States more than a century after it was built.

During the opening ceremony, the Reverend S. Parkes Cadman called it the Cathedral of Commerce. It was the tallest building in the world when it was completed, and held the title until 1930, when 40 Wall Street, the Chrysler Building, and Empire State Building took over the title in rapid succession.

The Woolworth company owned the Woolworth Building for 85 years until 1998 when the Venator Group (successor to the F.W. Woolworth Company) sold it to the Witkoff Group for $155 million. In the aftermath of the September 11, 2001 attacks a few blocks away, the Woolworth Building was without electricity and telephone service for a few weeks but suffered no significant damage.

At precisely 7:30 p.m. EST, then-President Woodrow Wilson turned on the building’s lights by pressing a button in Washington, D.C.

Woolworth commissioned a private basement swimming pool below the ground. The abandoned pool was one of the property’s most intriguing secrets in the years that followed Woolworth’s reign, only visible during private tours. The pool has recently been restored to its former glory–and its original luxurious intent.

The Woolworth Building was designated a National Historic Landmark in 1966.

The upper  30 floors were sold to a real estate developer in 2012, and the building’s new life as a luxury residence began, though the lower floors are still occupied by office and commercial tenants. During the Woolworth Building’s first foray into luxury living in the twenty-first century, the most expensive penthouse in the city topped the structure. In 2014, the breathtaking sky palace within its iconic copper pinnacle was listed for $110 million.

The most recent refurbishment of the building has proven to be the most impressive of all, including numerous restorations and changes to the building’s interior. A new private lobby was also built for residents, and F.W. Woolworth’s personal 40th-floor office’s coffered ceiling was moved to the entryway.

The new residential interiors of the building were designed by Thierry Despont and Eve Robinson, and feature custom cabinetry, precision appliances, and fabulous fixtures and fittings. Each unit also has its own private space in a wine cellar, as well as access to the restored private basement pool. The 30th floor houses a cutting-edge fitness center, while the 29th floor houses the Gilbert Lounge, named after the building’s architect.

Today, the building is closed to the public however, visitors are allowed to enter on an escorted tour. Tours are offered daily and start at $20 per person. The Woolworth Building is located across the street from City Hall Park at 233 Broadway, at the southwest corner of Broadway and Park Place in Lower Manhattan.