Autumn is a wonderful season in New York City. The weather is nice, the leaves change colors, and the parks are beautiful. It’s a very enjoyable time to visit NYC.

The weather is usually mild and pleasant for walking around. Average high temperatures are 64° F (18° C) for October and 53° F (12° C) for November. It can get chilly, especially at night, so come prepared with sweaters and jackets.

The leaves on the trees change color this time of year, dotting the city with yellows and reds. The peak of fall foliage, when the colors are the most brilliant, is in late October. Central Park has a high concentration of trees and is one of the best places in Manhattan for seeing fall foliage.

Apples are a big crop for the state of New York. The Union Square Greenmarket is a fantastic place for finding locally grown apples. Regional farmers come to sell fresh produce and other goods at this outdoor market. 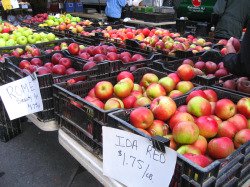 Many varieties of apples are available. Don’t forget about the apple cider – you can purchase it by the cup or the jug.

Keep an eye out for the deliciously dense apple cider doughnuts! These moist cakey treats are an autumn tradition. They are sold at several different stands at the Union Square Greenmarket.

The Union Square Greenmarket is located along the western side of Union Square Park. It is held on Mondays, Wednesdays, Fridays, and Saturdays.

Two of the Most Popular Cruise Options:

Every year the Halloween Parade through Greenwich Village is quite a sight to behold. About 50,000 people participate in the parade (any person with a costume can march) and many more show up just to watch. It is the largest public Halloween event in the country.

New Yorkers showcase their creativity with elaborate costumes, puppets, and floats that take months to create. The whole thing is very spirited and wildly entertaining. Would you expect any less from a city full of artists and theatrical people?

The parade route is along Sixth Avenue from Spring Street to 16th Street. The parade begins at 7 pm on October 31st. It’s best to arrive by subway. The crowds are thick so if you want a good viewing spot, show up early. halloween-nyc.com

Autumn in New York City is for Running…or Watching

The annual New York City Marathon occurs every autumn in New York City. This famous road race is a huge event for participants and spectators alike. The crowds are so large that it seems as if the whole city comes out to watch. 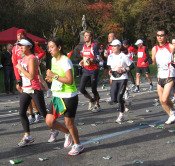 The event is full of contagious energy – bands along the course provide entertainment, uplifting crowds cheer on runners they don’t know, and witty handwritten signs abound.

The city really goes out of it’s way to make this event great. Who says New Yorkers aren’t hospitable? 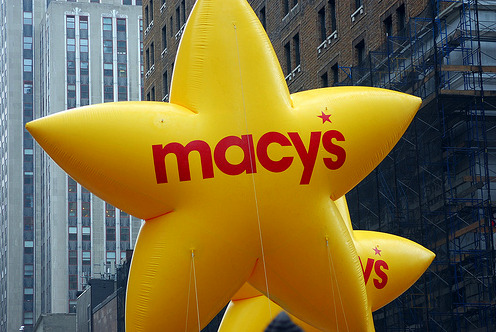 The crowds are big and the weather can be chilly, but going to this famous parade is guaranteed to make your Thanksgiving memorable. The parade marks the beginning of the Christmas season in New York City.

Around the country, people are familiar with this famous Thanksgiving Day parade. Usually they see it on TV when the turkey is in the oven and they’re thinking about mashing the sweet potatoes.

If this is what comes to mind when you think of the Macy’s parade, you’re not alone – about 50 million people watch the parade each year. It is televised live annually on NBC.

Make Your Thanksgiving Fun and Memorable

Watching the parade on TV is great, but if you are willing to brave the cold and the crowds, you can experience it first-hand.

Going to the parade is sure to make your Thanksgiving memorable and put you in the holiday spirit. The parade is free. No tickets are sold to this event – you just show up. The earlier the better!

Despite the fact that the parade takes place on Thanksgiving, it is very Christmas-themed, with Santa and his reindeer bringing up the rear. The parade effectively marks the start of the Christmas season in New York City. In fact, it was originally known as the “Macy’s Christmas Parade”. The parade is always fun, festive, and family-oriented.

The parade route offers two and a half miles of public viewing.

The parade starts at Central Park West and 77th Street at 9 a.m. From there, it goes south, winding around the southwest corner of Central Park and then heading down Sixth Avenue.

The parade ends in Herald Square, in front of the flagship Macy’s department store.

Tips for Attending the Parade

You don’t have to go to the parade to see the giant floats in person. The balloons are inflated the day before the parade at Columbus Avenue and 77th Street, near American Museum of Natural History. The public viewing is from 3 p.m. to 10 p.m. on the Wednesday before the parade. This event can also be very crowded.