Union Square is a major public square in Manhattan, New York City. It is located at the intersection of Broadway with 4th Avenue, formerly known as Bowery Road. Its name, surprisingly, came about because the site is the union of two main streets in New York City. The neighborhoods surrounding Union Square include the Flatiron District to the north, Chelsea to the west, Greenwich Village to the south, and Gramercy to the east. Streets bordering Union Square include 14th Street to the south, 17th Street to the north.

Union Square Park is definitely not a high-end park dominated by well-dressed business people and nannies pushing strollers. Instead, it is a lively and popular hangout for a rather diverse crowd of people. 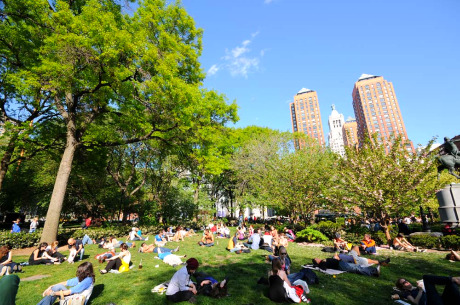 Union Square was opened in 1839. Among the features of the square is the statue of George Washington. Created in 1856, it was the first equestrian sculpture of an American, and the first public sculpture to be erected in New York since the equestrian statue of King George III that was put up in 1770. Later additions to Union Square include the statues of Marguis de Lafayette in 1876, Abraham Lincoln’s statue in 1870, the James Fountain in 1881, and a statue of Mahatma Gandhi in 1986.

Until recently, Union Square was a seedy neighborhood with drug dealers. However, an urban renewal has transformed it into a more gentrified neighborhood. A farmer’s market now operates at Union Square bringing farmers from throughout New York State to sell their produce here four times a week.

On any given day, the park is likely to have an eclectic mix of musical performers, skateboarders, college kids, hipsters, and religious zealots, as well as businessmen and nannies. It is hard to beat for people watching. 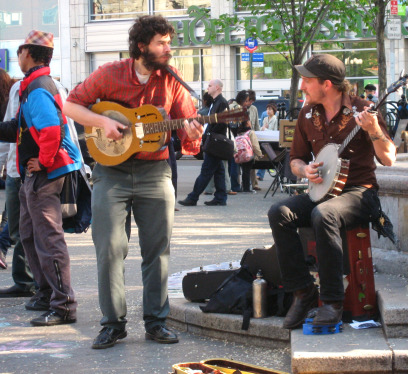 The park is centrally located with Greenwich Village to the south and the Flatiron District to the north. New York University and the New School are also nearby.

A Popular Spot to Meet and Hang Out

The park is generally crowded, if not downright crammed with people. The most popular place for people to congregate is at the large plaza on the south end. There are gatherings of people at almost any hour of the day or night here. People sit on the steps and railings or stand in groups. 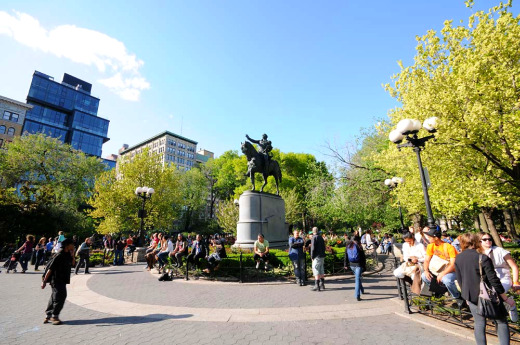 A statue of George Washington on a horse seems to oversee the plaza’s activities. The park also has statues of Abraham Lincoln, Gandhi, and Marquis de Lafayette.

Enjoy the Day and Take In the Scene

The park has wide tree-covered walkways lined with benches which, although plentiful in number, are at times completely full. Sunbathing and lounging on the grass are also popular activities when the lawns are open. 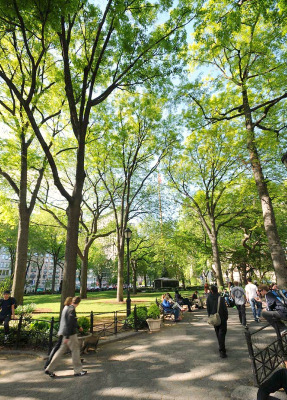 If you’re looking to bring a picnic lunch or a snack to the park, there is a Whole Foods store right across the street from the south end of the park. There are also plenty of cafes and casual eateries all around the perimeter.

There is a playground at the newly renovated north end of Union Square Park complete with a giant sandbox. A dog run is located on the west side.

Union Square has long been a popular spot for political activists and demonstrators. The first Labor Day parade took place in Union Square on September 5, 1882. This marked the beginning of an effort to set aside one day each year to recognize American laborers.

Legislation was signed to make Labor Day a national holiday 12 years later. It is because of this event that the park has been named a National Historic Landmark.

Even today it is not unusual to see protests spurred on by current events in the world.

The Union Square Greenmarket is an open air farmer’s market with fresh regional foods and plants. It is held four days a week. 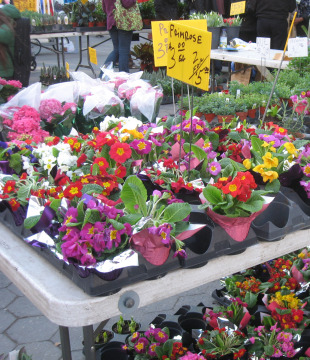 You can find artists selling their paintings and other crafts nearly every day.

If you’re visiting for the winter holidays, don’t miss the Holiday Market at Union Square. These crowded little shops are open between Thanksgiving and Christmas Eve and are a great place to find interesting and handmade gifts.
Location and Directions

Union Square Park is located between Broadway and Park Avenue South and between 14th and 17th Streets.

The Union Square Greenmarket is a local farmer’s market with a New York City twist. To call it a “big city farmer’s market” sounds like an oxymoron, but the greenmarket real does offer the best of both worlds. NYC’s first and largest greenmarket features fresh produce, meats, cheeses, bread, and more in the heart of the big city. 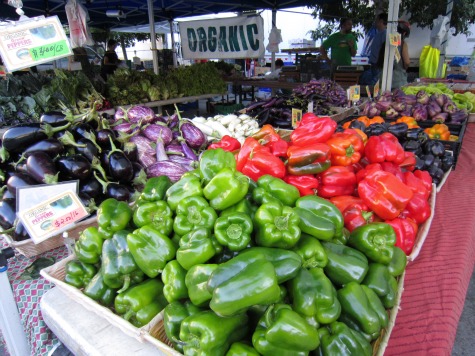 Four days a week all year round, regional farmers and bakers drive into the city to sell their goods at this open air farmer’s market. This gives millions of city dwellers access to farm-fresh foods and the opportunity to eat local.

A Trendy Spot for Food Shopping

The Union Square Greenmarket is popular with locals and even frequented by local chefs. The greenmarket caters well to the posh and choosy tastes of the New York City crowd. It offers plenty of organic, vegan, and sugar-free options. 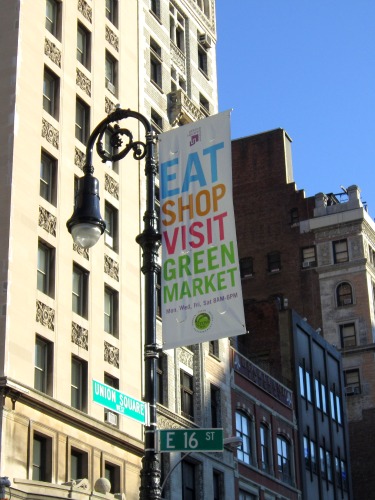 The market has a variety of items ranging from eggs and bread to flowers and wheat grass. Fresh fruits and vegetables are plentiful. The baked goods are excellent and there is an assortment of dairy and meat products. If you’re lucky, you may be able to pick up some free samples and even taste wine.

The selection varies from season to season but the market is open all year long. Summer has the best variety, but the farmers have plenty to offer in the other seasons too. Apples are everywhere in the fall and hot cider is always a big hit in the colder months.

How to reach Union Station