Battery Park in New York City is a great park to visit because there is so much to see in a small area. The park has a waterfront promenade with excellent views of the Statue of Liberty and the New York City waterways. It is full of history too, with an old fort and numerous statues and memorials.

Battery Park is a 21-acre (8.5 hectare) park at the southern tip of Manhattan, New York City. It was named after the artillery battery stationed there by the Dutch and British to protect the harbor. At the center of the park is Castle Clinton, a fort built by the Americans and replaces Fort Amsterdam which they demolished in 1790. At the time Castle Clinton was built, it stood on an offshore island. At that time, the shore came to where State Street is. Land reclamation in the 19th century created the park, enclosing Castle Clinton.

Any tourist who takes a ferry from Manhattan to Liberty Island to see the Statue of Liberty has walked through Battery Park to get to the ferry terminal.

A Nice View in Every Direction

The south end of the park has a nice walkway along the water. The benches lining the walkway are perfect for sitting back and enjoying the every-changing panorama.

From the water’s edge, you can look out across the harbor and see the Statue of Liberty, Ellis Island, Governors Island, and New Jersey. The Staten Island Ferry, water taxis, coast guard boats, and other seafaring vessels pass by along this active waterway. 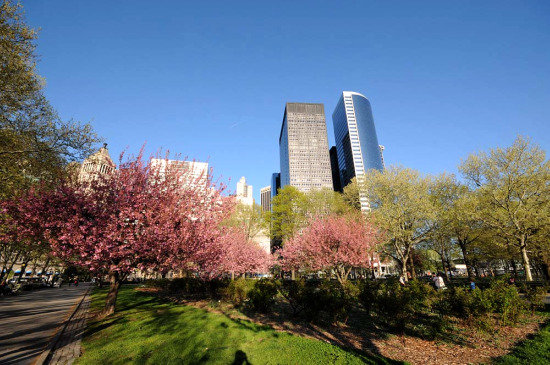 To the north of Battery Park is Pier A, formerly fireboat station, and Hope Garden. To its south is Battery Gardens restaurant and the United States Coast Guard Battery Building. From the waterfront, one can take ferries to the Statue of Liberty and Ellis Island.

A hive of activity goes on under Battery Park. The Brooklyn Battery Tunnel carries vehicular traffic to Brooklyn, the Battery Park Underpass carry traffic from West Street to the FDR Drive, the IRT Broadway-Seventh Avenue Line and the IRT Lexington Line has an interchange at the South Ferry subway station at Battery Park.

To the northwest of Battery Park is a mixed residential-commercial development called Battery Park City. It was developed from a landfill that was in the area. The area has the skyscrapers of the World Financial Center, as well as the Battery Park Promenade, a series of parkland along the shore of the Hudson River.

Battery Park in the winter

Because it is the launch point to the Statue of Liberty, the park generally has a lot of tourists and the things that tend to follow tourists. Souvenir vendors and performers tend to hang out around Castle Clinton, where the ferry tickets are sold.

You may see a few people dressed up as the Statue of Liberty, hoping you will pay a few coins to have your picture taken with them.

Battery Park is full of statues and memorials dedicated to various historical events. Some of our favorites include:

Castle Clinton is the major historical landmark of Battery Park in New York City. This structure was built in 1811 as a fort to defend New York Harbor. The fort held 28 canons, but never saw any military action. It was designated a National Monument in 1946.

Castle Clinton now functions as a visitor center for the National Park Service. A booth inside the walls of the fort sells ferry tickets to the Statue of Liberty and Ellis Island.

How does an island disappear? The fort was originally built on a small island that was linked to the rest of Manhattan by a drawbridge. The space between the two was later filled in to extend Manhattan.

This memorial has an eagle on a pedestal, which faces the Statue of Liberty and is centered between two rows of granite pylons. The eight pylons bear the names of American servicemen who died in the Atlantic Ocean during World War II.

This monument to the veterans of the Korean Conflict features a granite obelisk with a cut-out in the shape of a soldier, known as the Universal Soldier.

When standing on the north side of the monument, you can look through the cut-out and see the park and water in the background.

The designer, Mac Adams, designed the monument to serve as a sundial. The base of the monument is decorated with mosaics of the flags of countries that participated in the conflict.

The Immigrants sculpture is located near Castle Clinton, which processed newly arrived immigrants in the late 1800s before the operation was moved to Ellis Island.

This touching memorial is dedicated to merchant mariners who have died at sea. It portrays men in a sinking lifeboat. 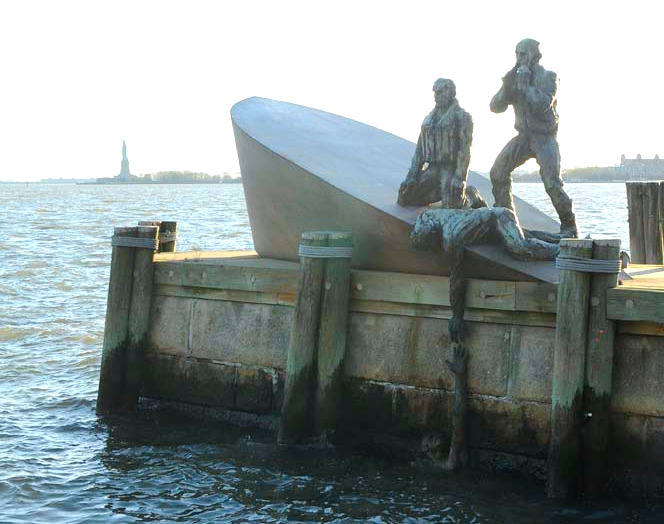 The scene is based on an actual event in which a Nazi U-boat attacked a merchant marine vessel during World War II. The Nazis aboard the U-boat then photographed the victims clinging to their sinking boat.

This bronze sculpture by Marisol Escobar was inspired by that photograph. The sorrowful scene of the men calling for help and attempting to rescue one who has fallen into the water is quite poignant.