The Charging Bull, or Wall Street Bull, isn’t just any statue. It is one of the most popular statues in New York City, and perhaps the world. The bronze figure of a bull preparing tocharge measures 11 feet in height and weighs 7,000 pounds. 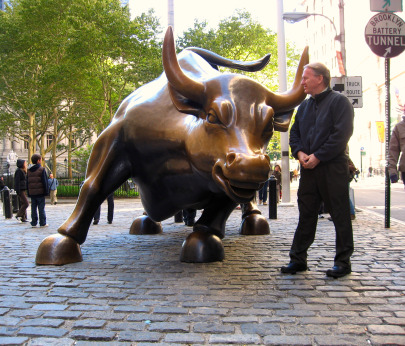 The Charging Bull has come to represent the American stock market and big business. It is also one of New York City’s most popular attractions. Tourists from all over the world come to see the bronze beast, striking poses and taking photos in front of it.

The Charging Bull can be found in the Financial District. It is located on Broadway, just north of Bowling Green Park, just below the intersection with Morris Street.

The Charging Bull was created by Arturo Di Modica, an artist originally from Sicily. The statue was unceremoniously dropped off outside the New York Stock Exchange in the middle of the night by the artist himself in 1989. The police swiftly carted off the unsolicited bull. Soon after, the parks commissioner had it placed in its current resting spot at the northern tip of Bowling Green Park. The bull has been a huge hit with the public ever since. 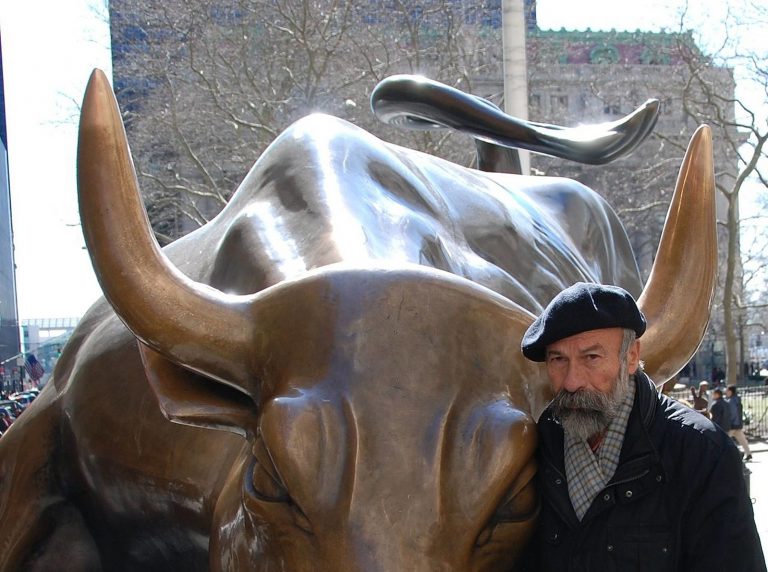 Di Modica created the bull after the 1987 stock market crash and said his work represented “the strength, power and hope of the American people for the future.”

The bull’s home two blocks south of Wall Street is supposed to be temporary even though it has been there since 1989. It’s installation on public land has never been approved.

Di Modica actually put the statue up for sale in 2004, with the promise that the buyer would never move it. As of today, it remains unsold and Di Modica still retains the copyright for the piece.

What To Do with an Over-Sized Bull

The bull is a popular photo spot for many tourists. People love to have their pictures taken while standing beside the fierce looking head, climbing on top of the bull, or even posing next to the anatomically detailed backside.

The bull’s peculiar appeal attracts visitors from all over the world. Rubbing the bull is common, perhaps for good luck?

The bull is located on Broadway at Bowling Green Park in Lower Manhattan.

Because of its position between Wall Street and Battery Park, the bull makes the perfect stop-off when visiting these or other attractions in the area. There is a small cobblestone plaza surrounding the bull, but on either side are busy streets, so take precautions and don’t cross without first checking for cars.

The closest subway stop is Bowling Green Station (4 and 5 trains).

While the Bull is one of Wall Street’s most well-known landmarks, there is much more to see in the Financial District when you visit. Consider some of the following nearby attractions:

Cathedral of Saint John the Divine
New York City Police Museum
NYC City Pass Review – Is it Worth the Money to Buy City Passes?
What Makes New York City so Beautiful and Appealing?