The Intrepid Sea, Air & Space Museum is one of America’s leading historic, cultural, and educational institutions. Since 1982, the Museum has welcomed more than 10 million visitors. The focal point of the Museum is the aircraft carrier Intrepid, one of the most successful ships in US history, including what has been called the worst day in Intrepid history when in 1944, two kamikaze aircraft struck the Intrepid. The ship is now a national historic landmark and one of the most unique attractions in New York City.

In 1943, Intrepid was commissioned and served proudly in World War II. She went on to serve as one of the primary recovery vessels for NASA, three tours of duty off Vietnam, and submarine surveillance in the North Atlantic during the Cold War. Today her service continues as a premiere educational center and a monument to all who have served our nation in uniform.

Fun for Kids and Adults

The interactive exhibits, vast assortment of sea, air, and spacecraft, and a unique insight into the lives of deployed sailors is quite intriguing for any age, although many parts are specifically geared toward kids. 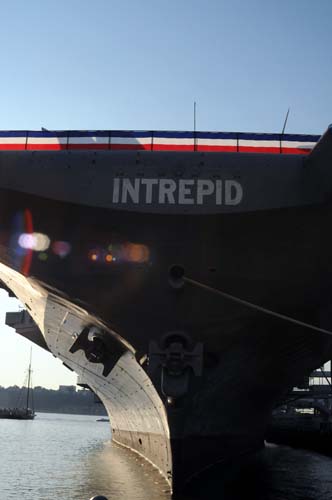 If you like watching the history channel, have any interest in aircraft (any at all), or would enjoy learning how people live at sea for six months, you will probably enjoy the Intrepid Museum.

Walk the deck of an aircraft carrier, the corridors of a World War II submarine, the center aisle of a Concorde, and see spacecraft all in one place. The USS Intrepid, once an active aircraft carrier, has been transformed into a floating museum docked at New York City.

Walk all over the aircraft carrier, see how sailors live, and interact with many of the exhibits. The fascinating displays include dozens of exotic military fighter aircraft that line the flight deck, an SR71 Blackbird, and Mercury spacecraft replicas. The new Space Shuttle Pavilion displays a space shuttle orbiter, Enterprise!

The decommissioned British Airways Concorde and a WW II submarine (the USS Growler) are crowd favorites. There may be long lines to see these two, but most will agree that it’s worth the wait.

The Museum features a large range of interactive exhibits and events providing a snapshot of heroism, education, and excitement. Children and adults alike find themselves immersed in and inspired by the Museum’s exhibits, which range from thrilling historical re-creations such as Kamikaze: Day of Darkness, Day of Light, to new interactive displays. Visitors also can ride in the A-6 Cockpit Simulator, visit the Virtual Flight Zone, and tour the inside of the world’s fastest commercial airplane, Concorde.

Over 50,000 school children a year participate in the Museum’s unique educational programs. These programs cover every age group and they include special initiatives such as character and leadership development. The Museum is also the host for the annual NYC Fleet Week celebration in honor of our military personnel.

With over 3/4 of a million visitors to this national icon the mission of the Intrepid Sea, Air & Space Museum is to honor our heroes, educate the public, and inspire our youth. This mission is realized through the Museum’s preservation, collection, exhibitions, interpretations of individual contributions, and exceptional education programs particularly as pertaining to the service era of Intrepid from World War II through the present. The Museum seeks to provide a powerful visitor experience fed by a dynamic, innovative, and moving environment for learning and enjoyment.

The Intrepid Sea, Air & Space Museum is one of America’s leading historic, cultural, and educational institutions. As the name suggests, the Museum is centered on the aircraft carrier Intrepid (CVS-11), one of the most successful ships in US history which was launched in 1943 and served the US Navy for 31 years. It played a pivotal role in the campaign to liberate the Philippines during the Second World War.

The museum in itself makes for a very easy visit since it covers only one floor of the Intrepid’s interior. The model planes in front are pretty popular and the A-6 contains a Cockpit Challenge flight video game which is free. However, the unanimous vote by the crowd for the most popular exhibit in the museum goes to The Growler, a 317 foot long guided-missile submarine that allows you to experience life aboard a submergible vessel from up close and personal.

The sub can only be accessed by people six years and older, and there’s a guided tour that runs every 15 minutes in groups of 15. It begins with a short, seated video presentation, after which you are taken into various parts of the sub.

Starting October 12 and continuing through December 21, the Intrepid Sea, Air & Space Museum is organizing a special exhibition titled 27 Seconds: The Apollo Tragedy. As you can gather from the name, this exhibit takes visitors through the details of the 1967 Apollo 1 tragedy when, during routine tests, fire engulfed the command capsule. This fire claimed the lives of astronauts Virgil “Gus” Grissom, Edward White, and Roger Chaffee.

These three astronauts were the original moonwalkers who would have gone in place of Neil Armstrong to rewrite history, had they survived. This exhibit has memorabilia, rare photographs, artifacts, and narrative related to the three astronauts, ranging from Chaffee’s flight jumpsuit to the death announcement sent to his family.

The exhibit is not very extensive and neither is it very detailed. However, what has been put together is quite impressive and it makes you alive to the hard work that navy personnel and astronauts put in on a day to day basis in order to rewrite history as we know it.

Admission prices vary depending on whether you want to see the Intrepid only, Intrepid + Space Shuttle Pavilion, or an All Access Pass to experience everything the Intrepid has to offer.

For detailed pricing, see Ticket Information on the Intrepid website.