For generations, St. Bartholomew’s Church has played an important role in the lives of New York City’s Episcopalian followers. Today, this place of worship boasts tremendous cultural, architectural, and aesthetic value on numerous levels. While strolling the busy streets of Manhattan, it’d be tough to miss the stunning facade of this historic church that has even made its way into mainstream culture.

You don’t have to be a devout follower of the Episcopal parish to embrace the stunning architecture and art inside St. Bartholomew’s Church. Designed by the American artist Hildreth Meiere, the stained glass windows and mosaics are comparable to installations in world-class museums and galleries. This talented artist specialized in the Art Deco style that dominated the scene in the 1930s and 1940s.

Five mosaic installations decorate the domes inside this iconic church. Authentic 24-karat gold is seamlessly integrated into the building’s interior design. When looking at the intricate details of the art in St. Bartholomew’s Church, visitors will notice depictions of prominent biblical figures. For example, one of the mosaics includes images of John, James, and Peter. Traditional icons, palm trees, and other important Christian symbols are beautifully shown in the works by Meire. One of the biggest of its kind in the United States, the pipe organ is another notable feature of this church.

In 1835, St. Bartholomew’s Church was established to serve the growing population of followers of the Episcopal denomination. This modest church originally opened in a small house of worship in the Bowery district of Manhattan. 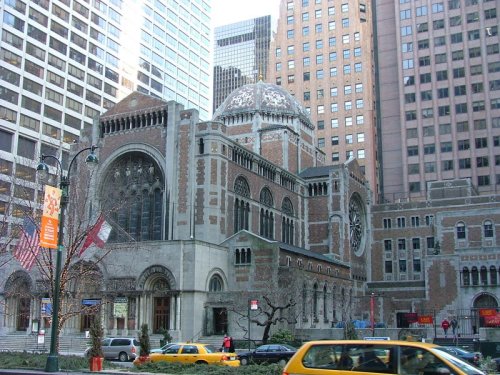 In the 1870s, the institution gained enough financial and social support for a new location. A move to Madison Avenue marked a major transition in the church’s evolution. James Renwick was the chief architect of this expansion project in the heart of Manhattan. This famous architect was also involved in the design of the nearby St. Patrick’s Cathedral, which eventually became one of the most prominent Catholic venues in NYC.

By the end of the 19th century, St. Bartholomew’s Church became heavily involved in the city’s social programs. The affluent Vanderbilt family provided generous donations to fund the institution’s outreach initiatives to the poor of the city. Residents of local tenements found great relief from the leaders of this church.

The beginning of the 20th century marked another major chapter in the history of St. Bartholomew’s Church. Architect Bertram Goodhue was commissioned to design a third location for the entity. In 1917, a splendid and grand landmark opened to celebrate yet another expansion on a massive scale.

Romanesque Revival and Byzantine Revival are the dominant architectural styles of the building’s facade and interior design. The Roaring Twenties had a deep impact on the overall function of this iconic church in the heart of NYC. Dominated by a cultural renaissance, this era temporarily led to a decline in religious worship. Nevertheless, St. Bartholomew’s Church has managed to maintain its integrity as one of the leading places of worship in the Big Apple.

Finding Metropolitan Transportation Authority (MTA) buses near the church shouldn’t be an issue. Additionally, scores of signature NYC taxis navigate the busy avenues and streets that surround this historic place of worship.

Parking is severely limited near the church, but drivers might find some indoor garages that charge hourly and daily rates.