Pretty much every person visiting New York City for the very first time will most likely get a bit confused by the huge New York Subway system, which is undoubtedly the best way to quickly get around the city. The good thing is – it’s a lot easier than it looks at first. I’ll tell you the easiest bit right here: There are no zones. Nothing to worry about, you can jump on a train for just a couple of stops, or transfer between multiple lines all the way to the other end of New York City. The price is always the same.

First of all, here is the official MTA Subway map of New York City. Before you visit New York, download it onto your phone.

Most importantly, you’ll have to remember “uptown” and “downtown” on the New York Subway. Trains going uptown will go through Manhattan generally northbound, and trains going downtown will go through Manhattan generally southbound. Sometimes, uptown is also called Bronx-bound, and downtown is also called Brooklyn-bound, relating to those two NYC suburbs.
Other than that, the numbers or letters of the different trains are also worth having a look at. These will help you decide which one to get in terms of local and express trains.

Now let’s have a look at the dark green line as an example. What looks like just one dark green line actually has three different lines (4, 5, 6) running along its track. There are eight different final stops, of which four are downtown and four are uptown. Numbers and letters in squares indicate final stops, while numbers and letters in circles indicate that this train operates along this part of the line.

Example: A downtown 4 train will always terminate at “Crown Hts. Utica Av.”, whereas a downtown 5 train may terminate either at “Bowling Green”, or at “Flatbush Av. Brooklyn College”, a considerable difference. You’ll see it marked in yellow below. 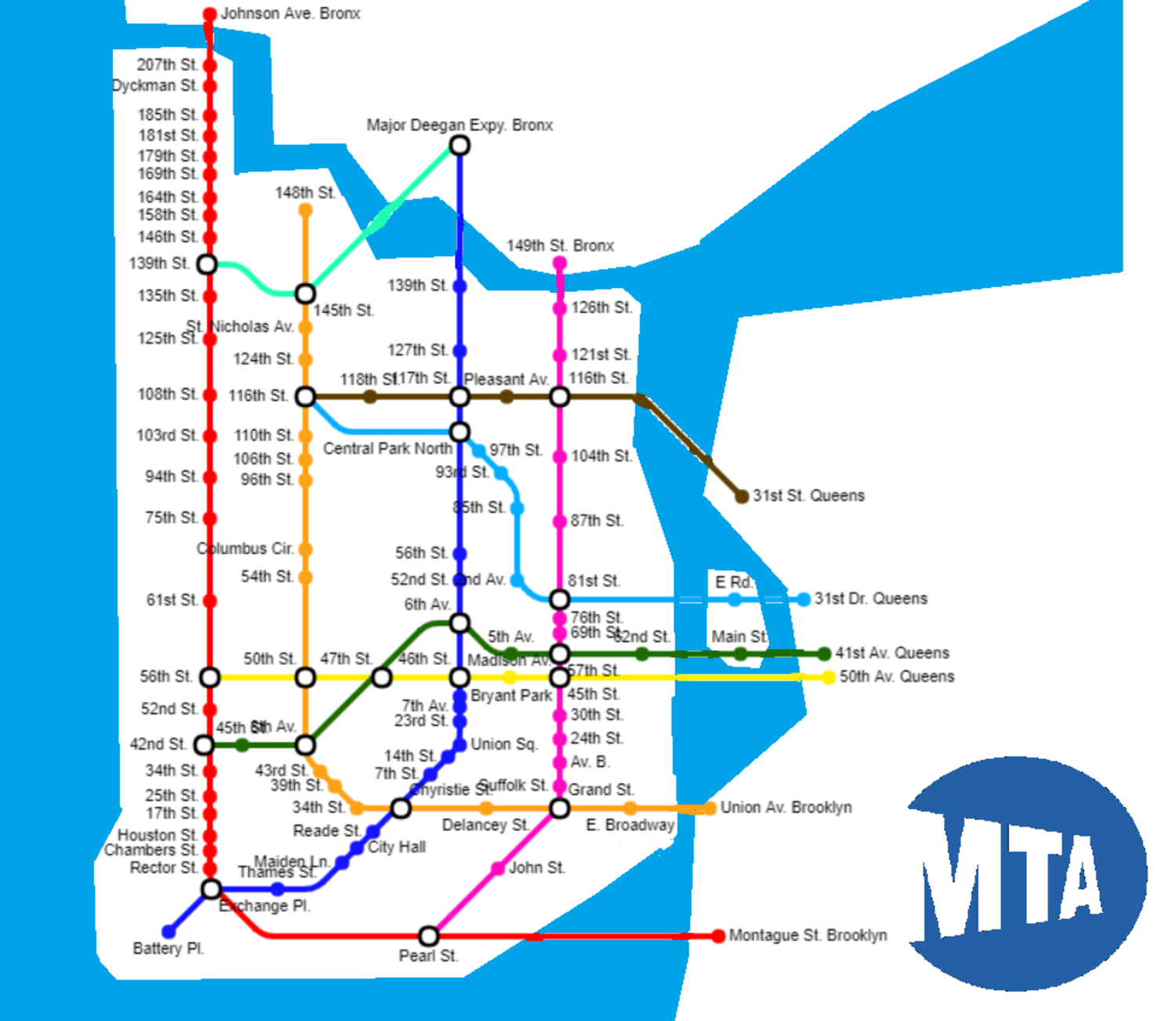 In this screenshot, I’ve marked the stops along Manhattan. You can see 86th and 125th Street are express stops – all trains stop here. As opposed to this, 77th, 96th, 103rd, 110th, and 116th Street are local stops – only the local train 6 stops there. As the tracks continue out of Manhattan and into the Bronx, the ways of 4, 5, and 6 splits, and as of that point, they all become local trains (apart from a few rush hour express exceptions):

Going for a ride

Even if you are a bit confused now, there is no need to be. You’ll find yourself doing the following on the New York Subway most of the time.

Let’s say you are near Union Square and you want to go to the South-Eastern corner of Central Park near 5th Avenue: 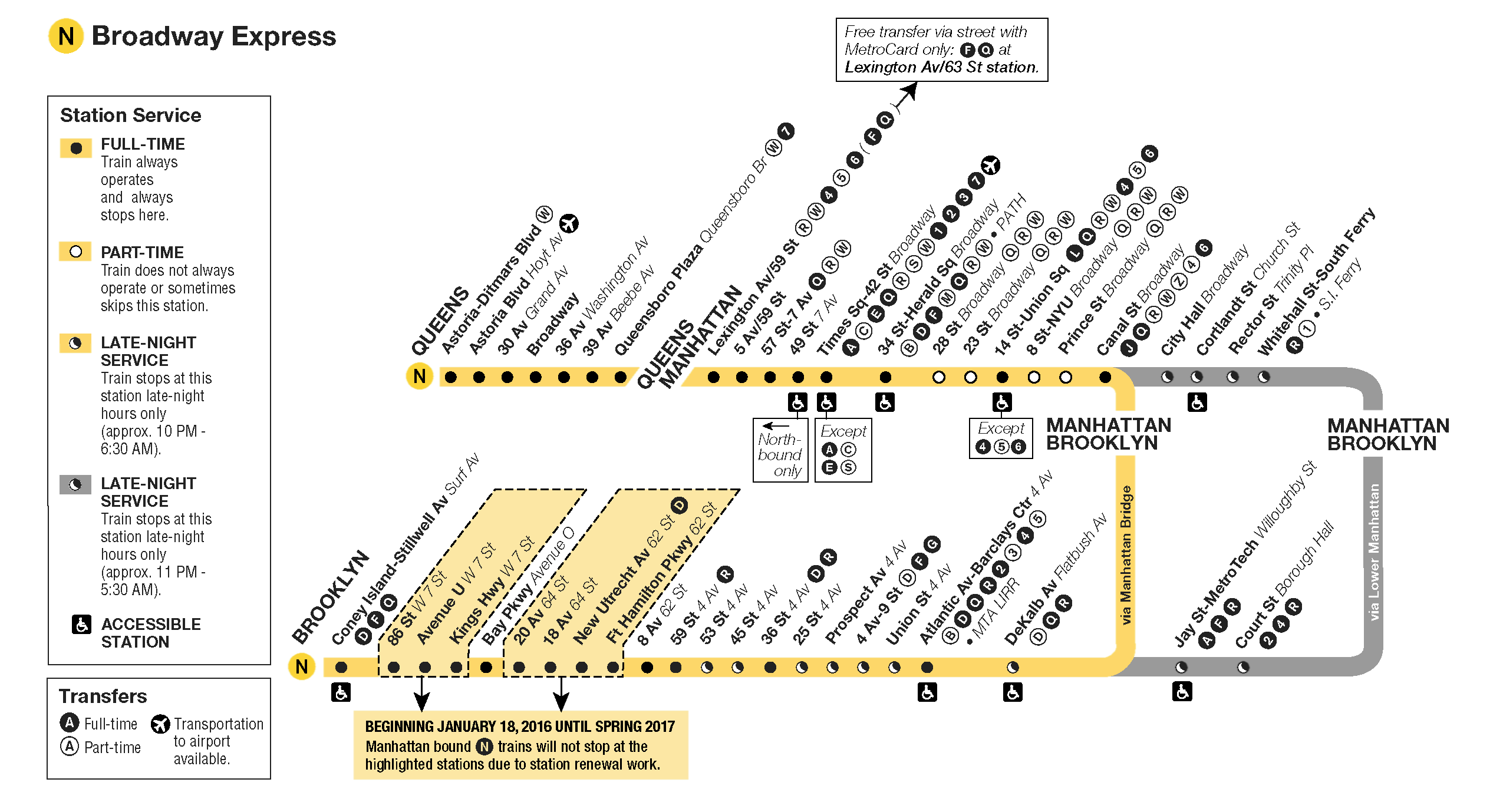 There is only one line going straight from your place to there, which is the yellow line. What you want, is an uptown N, R or W service, because Q doesn’t go where you want to go. Not too hard to figure out, right?

You need to figure out which train you want before entering the New York Subway system. In some stations, there is one entrance for all the platforms, in other stations, there might be specific entrances depending on the train and the direction you want to get. Once through the gate, you’ve paid for your trip. Doesn’t matter too much if you have an unlimited travel card, but worth keeping in mind!
One thing to remember about the gates: Don’t swipe your Metro Card too slowly or else it can’t be read by the system! And if you do swipe too slowly, keep trying the same gate, not another one, as this might otherwise block your card for a while.

Getting off at your destination is not hard on the New York Subway. There are easy-to-understand boards inside most trains telling you which stop you’re at, and the signs out in the stations are easily readable as well. You won’t need your Metro Card again, you can just walk out.

Talking about the Metro Card, of course at first you’ll need to buy one. You can do that at vending machines in every subway station. Most of the time, as a tourist, you’ll want to buy an unlimited travel pass. It can be had for either a week (US$32) or a month (US$121). The machines are pretty straightforward and take credit card payments. If you’re asked to type in your zip code but don’t live in the United States, just type in 99999 and it’ll let you process the international payment.

You should note that the map is not to scale at all, for the purpose of fitting more information into a small amount of space. As a rough estimate, you should expect one inch on the map from North to South to be almost three times the distance of one inch from East to West. So for a more realistic scale, you’d have to stretch the map to three times its length from top to bottom.
As an example, imagine yourself being at the red cross in this screenshot. It would actually be a little bit closer to walk to the 72nd Street Q train station, compared to the 77th Street 6 train station.

There is every single Avenue (North to South) displayed on the map, but only very few Streets (East to West) are on there.

As you probably know by now, Manhattan is crisscrossed by a whole lot of Streets and Avenues. We’ll just imagine Manhattan to be perfectly north-south aligned to make it easier. The grid is not perfect, for example, Downtown the streets have actual names, and some of the avenues have names too, but it really helps in terms of knowing where you are.

Talking about that subway example, here is what it looks like on a more realistically scaled grid:

You can also use your unlimited travel card for the tramway going from Manhattan (60th St.) to Roosevelt Island and back. It’s a cable car and thus you get quite a nice view of Manhattan as well as the East River.

We hope this helps when you take your first trip to NYC! If you’re missing anything, or have any questions or suggestions, please make sure to post it in the comments or drop us an e-mail