There is no disputing that New York City is one of the world’s most exciting and interesting cities. Millions of individuals all across the world have made it a life goal to visit this global city. With the flashing lights of Times Square, the freedom that the Statue of Liberty and Ellis Island stand for, and the human element of everyone here trying to make it big, these locations have long been featured in Hollywood films and television shows.

You won’t get the same experience touring New York City’s various boroughs, districts, and attractions in most other American cities or most other cities around the globe.

First of all, after landing at JFK, we got a Skytrain to the nearest MTA Subway (Underground / Metro) station, called Jamaica. We then bought an unlimited pass for the entire subway network. Unfortunately, there was no three-day option, only a weekly option, but we figured it would still work out cheaper than single rides. A whole week’s MTA pass is about US$32. Not too bad for a city like New York!

So once you’ve got this pass, you head to your hotel. That already saves you the first taxi ride from the airport into the city (which is about twice as much as a week’s metro pass!).

So what will your hotel be!? This is a very tricky part of visiting New York City. To sum it up – you’ll want to stay in Manhattan because that’s where everything is, but it can be VERY pricey. If Manhattan is too expensive, it’s not a problem to get a place outside of it. As long as you’re using public transport, you’ll be in Manhattan in no time. Brooklyn will probably be your best bet, just make sure your place has a 24-hour subway connection. That’s all that matters really. If you’re only staying for a few days, quick transport is essential.
We’ve put together some recommendations for you:

There are a few low-priced hostels in Manhattan. We’ve heard good things about the HI NYC Hostel, you can stay there for about US$40 a person, it’s clean and modern, near Central Park and a subway station.

The Belleclaire is located on the Upper West Side. A short walk from a subway station, the Hudson River, or Central Park. It features modern, renovated rooms and has got good reviews.  You can often get a real bargain here, at under US$150 for most nights it’s excellent value for money in Manhattan.

The Fitzpatrick Grand Central is a very well-located hotel right in the buzzing center of Manhattan. Grand Central Terminal or Chrysler Building is literally a minute’s walk away. Rooms are bigger and more luxurious than at The Belleclaire, but prices are still fairly low, usually starting at under US$200.

While the Viceroy may not be the best super-luxurious hotel in Manhattan, it’s clearly the one where you get the best bang for your buck! It can often be booked for under US$300 a night, while competitors charge $500 upwards. It’s of course super modern, features views of Central Park and so on…

The design they used for the rooms is really cool and fits into New York so well, as you can see in this suite-bathroom picture:

Tip: Manhattan and its hotels are packed with business people. That means hotels will be a LOT cheaper during weekends and especially public holidays. Spending Independence Day, Christmas, or similar in Manhattan is surprisingly affordable. Also, Sunday to Monday night is traditionally the cheapest night in many places. For example, this year the Hilton New York Times Square sells for only US$185 the Sunday night of July 2nd.

Things to see and do in 3 days

First of all, if you’re in NYC for only a few days, of course, you can’t see everything there is. But it’s definitely a good amount of time to get a taste of this one-of-a-kind city! We loved our three days there and got to see a whole lot without spending too much money.

The big question you should ask yourself at the start is whether or not to get a New York Pass. Basically, you pay once for the pass and then get unlimited access to almost everything a tourist in New York would want to do.
It can really save you a ton of money if you’re planning on visiting most of the famous locations and museums. It’s also really good for tours and for hop-on and hop-off rides. We didn’t get one because we usually go to the places that are free or cheap to visit, and we don’t make much of museums.

So whether or not you decide to purchase one of these, the following places should not be missing from your to-do list!

It might seem pricey at first but trust us it’s worth it, you’ll see New York from the best viewpoints in the city, it’s impressive, to say the least! The three most popular places are on top of the:

They’re all more or less the same price at US$30 to 40 for a standard ticket. Which one you should go to depends on what you want to see. We decided to choose Top of the Rock observation deck at Rockefeller Center for the view. First of all, you get a great view of Central Park. Secondly, towards the other side, there is pretty much the whole skyline, with Empire State dominating right in the middle – the view is absolutely fantastic!

We can’t speak for the other ones since we haven’t been there, but with the pictures we saw, I think we made the right decision. From Empire State, you can’t see the Empire State itself, and from One World Trade, you can’t see Central Park. However, Empire State is definitely the most iconic and historic one to go to, and One World Trade is the highest one with great views of the Statute of Liberty, Brooklyn Bridge, and more. It really is up to you!

A walk across Brooklyn Bridge is really quite scenic and very iconic. You’ll probably want to walk toward Manhattan, so the best way to start out is by taking a subway to Brooklyn. The best station to get off at is “High St. – Brooklyn Bridge”. From there, you’ll need to cross a couple of streets and then take some stairs up onto the bridge. The walk across to the other side shouldn’t take longer than 15 to 30 minutes, depending on how many photos stops you’re taking of course. Best of all, it’s completely free.

Take the Tramway to Roosevelt Island

The Tramway (cable car) to Roosevelt Island is included in any unlimited travel metro card, so you might as well take advantage of it. We did a quick trip there and straight back just to enjoy the view and see New York from a different perspective, including its beautiful streets and avenues from above, and it was well worth it.

Go for a stroll around Central Park

You shouldn’t leave New York City if you haven’t gone for a walk in Central Park. Don’t underestimate the size of the park though! A walk from the northern to the southern end can easily take more than an hour. Central Park welcomes visitors daily from 6 a.m. to 1 a.m., but as with any outdoor site in a major city, you’re better off visiting in the day or early evening, with fewer tourists around. Check out the park’s official website for maps, and information on all the activities available and special events.

Visit some of the most iconic buildings

No city is like New York when it comes to historic, iconic buildings. The world’s oldest skyscraper, the Flatiron building, is only one of them. Visit the once-upon-a-time highest building in the world, some of the first tenement buildings

The 11th of September 2001 is one of the darkest days in the history of New York. Nowadays, Ground Zero is usually called “World Trade Center Site”. It’s referred to as one of the most remarkable memorial sites in the world, and that’s for a reason. It serves as the primary tribute to the nearly 3,000 victims of the 2001 terrorist attacks, as well as the six lost in the 1993 bombing. The Memorial’s twin reflecting pools and manmade waterfalls rest as eerie footprints where the World Trade Center’s Twin Towers once stood. The 1-acre-sized pools are enclosed in bronze panels on which the names of every victim are inscribed. 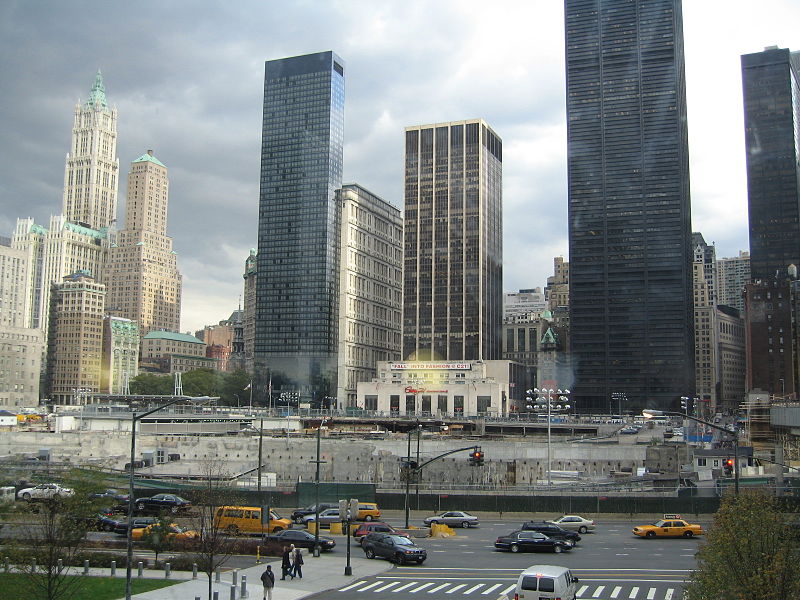 The most iconic and famous statue in New York, this brightly shining beacon draws visitors year-round. Even during low-season waiting times of up to 90 minutes just to catch the ferry over to Ellis Island are common. Therefore, to avoid some of the hassles and make the most of your day, here are a couple of tips.

One, get in line extra early so that you can get on one of the first boats.
Two, purchase a ticket and catch the ferry at the Liberty State Park in Jersey City, N.J. (you’ll get the same tour but face shorter lines).

Made famous during the Wall Street crash and recently the film “The Wolf of Wall Street”, this financial district is an eight-block-long street running roughly northwest to southeast from Broadway to South Street, at the East River, in the Financial District of Lower Manhattan in New York City. Visit the world’s two largest stock exchanges by total market capitalization: the New York Stock Exchange and NASDAQ, or watch the hundreds of businessmen flock to the streets during weekday lunchtime.

Time Square is exciting, colorful, and always jumping. With hundreds of shops to please any shopaholic, world-class restaurants, theatre performances, and the infamous billboards scattered across every avenue and street make sure to visit Times Square both during the day and at night to get the best of both worlds when snapping a few shots.

At this beautiful train station, you can eat some lunch, or shop till you drop, but make sure to take in the stunning scenery and architecture. Before you enter Grand Central Terminal, be sure to snap a few shots of the ornate Beaux-Arts neoclassical architecture outside. Inside the celebrated main concourse, you’re treated to glimmering marble floors, gold, and nickel-plated chandeliers, and a sky-themed ceiling, it’s truly magical and unlike any other train station in the world. 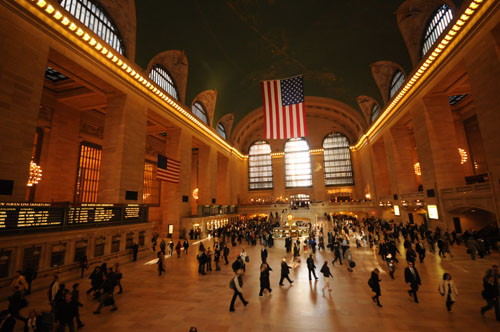 If you’re one of those people that finds shopping a religious experience, then between 34th and 59th streets you’ll find your Holy Grail. Even if you’re not planning to put your credit card to work at high-end stores, you must take a stroll along Fifth Avenue to window shop in Tiffany & Co, Louis Vuitton, Gucci, and much more. The stores on Fifth are somewhat mainstream, however; if you have a funkier style, head to SoHo.

A Few Extra Tours I Recommend:

You could spend months in New York City and still not see it all. However, here are a few NYC tours I highly recommend doing on your short trip to the Big Apple.

Have you been to New York? What’s you’re favorite thing to see and do here?