Summer in New York City means hot weather, spending time outdoors, and taking advantage of summertime activities all around the city. All summer long and all over the city, streets and parks play host to numerous fun and family-oriented events. It’s a fabulous time to be in NYC and take advantage of all it has to offer.

Summer in New York City is usually fairly hot and humid. During July and August, the two hottest months of the year, the average high temperatures are in the 80s. Summer evenings are usually quite warm as well. New York City parks are lush, green, and beautiful this time of year.

Summer in New York City is THE time for street events.

NYC street fairs and festivals take place all summer long in various parts of the city. They are usually free to attend. 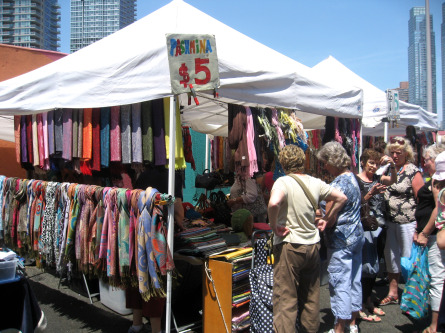 New York City street events are excellent places for finding good street food and people watching. The city has a large number of street fairs, cultural festivals, and flea markets to choose from.

4th of July Festivities in NYC

The Fourth of July is a highlight of summer in New York City.

The International Hot Dog Eating Contest hosted by Nathan’s Famous in Coney Island is always a popular event. This contest has taken place since 1916 and brings together only the fastest of hot dog eaters. Last year’s winner ate 68 hot dogs in 10 minutes!

The contest starts at noon on July 4th, but get there early if you want a good view. It takes place at Nathan’s Famous flagship store, at the corner of Surf and Stillwater Avenues in Coney Island. It also airs live on ESPN.

The 4th of July Fireworks in New York City are a spectacular show! 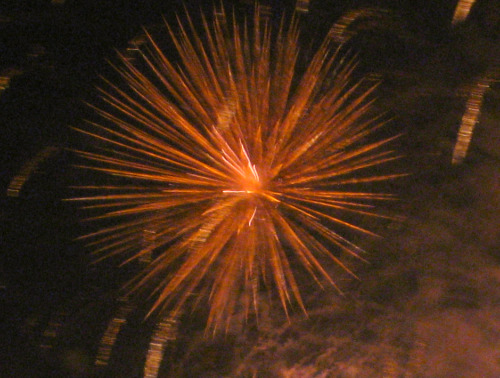 The fireworks are set off from barges in the New York waterways (the East River is the chosen site for 2015), illuminating the sky with streaks of red, gold, and purple. Find more information on the Macy’s website.

If you would like to watch the NYC fireworks show from your air-conditioned living room, catch them live on NBC.

During the summer in New York City, you can watch outdoor movies in some fun and unique places. Catch flicks between the skyscrapers of Manhattan, along the riverfront, or on top of an aircraft carrier. It’s easy to find outdoor summer movies in New York City. There are many locations for viewing free flicks under the sparkling lights of the city. 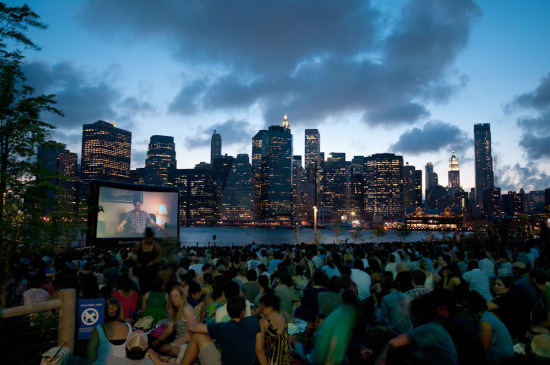 Watching an outdoor movie is fun, easy, and cheap, although the crowds can be large. All you have to do is bring a blanket and a picnic dinner (if you wish), arrive early, find a spot, and claim it quickly.

Movies with a View
It’s hard to beat watching a movie on a big screen with the Brooklyn Bridge and Manhattan as a glittering backdrop. As the movie begins, see the sun set over the city from this scenic spot in Brooklyn. To make the night even better, combine the trip with a walk over the Brooklyn Bridge.

Intrepid Summer Movie Series
Watching a movie on the flight deck of an aircraft carrier is certainly unique. Feel free to bring lawn chairs and food but no outside alcohol is allowed. The venue opens at 7:30 pm and the movies start at sunset. Space is limited.

Bryant Park Summer Film Festival
You’ll be sitting between skyscrapers when you watch a film at this Midtown park. The lawn opens at 5 pm for blankets and picnicking and attracts large crowds. The movies start at dusk. 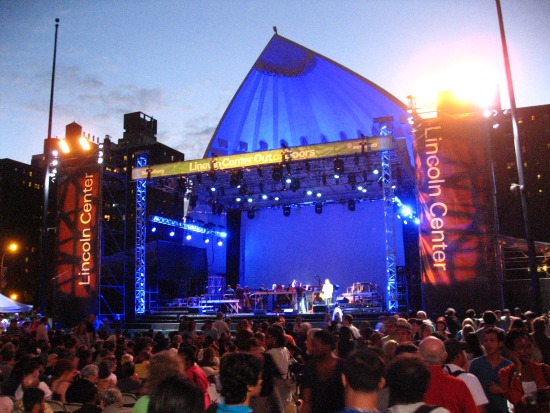 Summer concerts and performances are a fun way to spend a summer evening.

Musical events featuring talented artists and outdoor theatre performances are available for free all summer long in various locations around New York City. These events are popular, so try to arrive early to find a place to sit. Be prepared to sit on the ground and bring a picnic dinner if you’d like.

The long days of summer are well spent listening to tunes and watching dance and theatrical performances in the great outdoor spaces of New York City. A wide variety of summer concerts and performances take place all summer long.

Excellent options for enjoying music on summer evenings. All events below are free and open to the public.

SummerStage in Central Park
Central Park SummerStage has music, dance, and theatre events on afternoons and evenings from June through September. The performances are held outdoors and most are free. The events have concessions stands but you can bring your own food and drinks as well.All Mainstage events are held at Rumsey Playfield in Central Park (Enter the park at East 72nd Street off Fifth Avenue).

The lunch hour shows attract large crowds of business people, families, and tourists. As long as you’re in the park you won’t have trouble hearing the hit songs, although finding a chair is a different matter.

The US Open is one of New York City’s hottest summer sports events. The best players in tennis face off at one of the biggest and most exciting tennis events of the year.

The matches are played on hard courts at the USTA Billie Jean King National Tennis Center in Queens, New York City. The tennis center is accessible by public transportation.

Tickets to the US Open are popular and sell out fast.

More NYC Fun in the Sun!

Other great ideas for enjoying summer in New York City: