New York City’s Chinatown is a sprawling Asian community densely packed into a two-mile radius in lower Manhattan.  As far as cultural enclaves go, Chinatown reigns supreme.  But with so much to see and do, it can be overwhelming to the casual visitor.

“I’m astounded by people who want to ‘know’ the universe when it’s hard enough to find your way around Chinatown.” ~ Woody Allen

Chinatown is one of New York City’s most fascinating neighborhoods, rich in history, one could easily spend days navigating its bustling streets. But for those who are pressed for time, here is a composite list of the top places to visit in New York City’s Chinatown. Here are a couple of must-see attractions on your tour of Chinatown NYC:

Today the borders of New York City’s Chinatown has moved, and is more correctly identified as bordered by Delancey Street to the North (bordering the East Village and SoHo sections of NYC), East Broadway to the East (stopping at Rutgers Street), Broadway to the West (encroaching the TriBeCa sections of NYC), and Chambers Street to the South (encroaching the City Hall area).

Chinese immigrants moved to the East Coast cities of the United States when they faced increasing discrimination in the West Coast. New York City’s Chinatown started on Mott Street, Park, Peel and Doyer Streets. When the Chinese Exclusion Act was passed in 1882, there was already 2000 ethnic Chinese living there. The gender disparity is quite great: in 1900, there were 7,000 Chinese residents in Chinatown, but fewer than 200 were women.

Columbus Park is the only park in Chinatown. It was built on what was once the center of the infamous Five Points neighborhood of New York City, a dangerous slum area in the 19th Century.

Mott Street is a great starting out point for your Chinatown adventure. This street is filled with Cantonese restaurants, dim sum parlors, and small shops and grocery stores catering to tourists and the local clientele.

Browse the street and be sure to check out the following:

The Chinese love their tea so it’s no surprise that there’s a tea parlor around just about every corner in Chinatown. One of the local favorites is TenRen’s Tea & Ginseng Co., an adorable little tea shop where you can sample hundreds of different varieties of whole-leaf teas. Tea is sold by the ounce with a minimum sale of two ounces and is kept in enormous metal jars.

The store also loops around and has a second opening with a seating area where you can buy “bubble tea” (a mostly sweet tea with tapioca “bubbles” on the bottom) and milk-based teas ready to drink.

The Church of the Transfiguration

This Church has been serving immigrants to this neighborhood since 1801.

It has continuously evolved to meet the needs of the neighborhoods changing ethnicities – once catering to German and Italian immigrants, it now claims the largest Chinese Roman-Catholic Congregation in the US. Services are held throughout the day in English, Cantonese, and Mandarin. 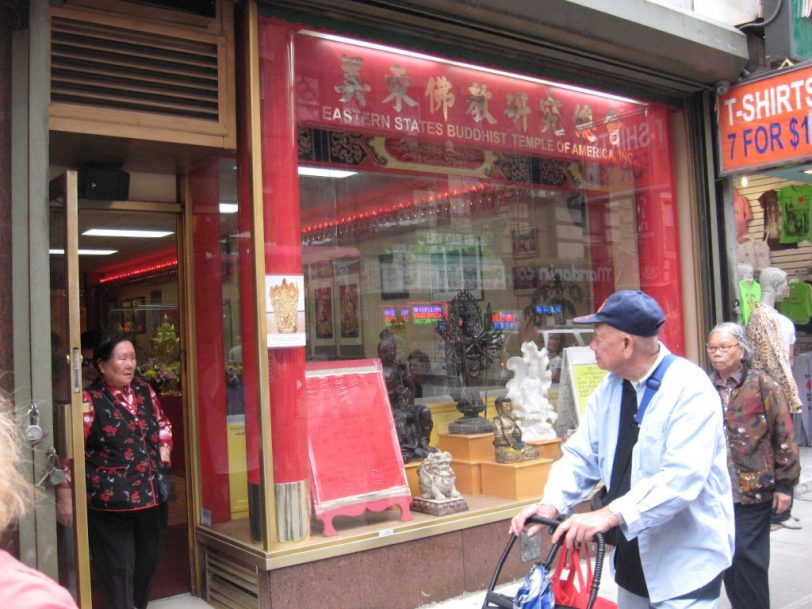 During your tour of Mott Street, you will inevitably stumble upon The Eastern States Buddhist Temple of America.

Though not as extravagant as the Mahayana Buddhist Temple (see below), it also boasts a giant gold Buddha and more than 100 smaller Buddhas and is worth visiting on your tour or Mott Street.

Museum of Chinese in America (MOCA)

The entrance fee is normally $7 for adults but is waived on Fridays from 12PM to 7PM. Visit the Museum of Chinese in America Website for more information.

Here you can find free Tai Chi classes in the mornings, Chinese Opera in the evenings and games of mahjong and chess being played all day long. Once called Mulberry Bend Park, Columbus Park opened in 1897 and was one of the first major urban parks in New York City.

Over the past century, it has undergone a series of renovations including the construction of a number of basketball courts, the installation of new playground equipment and the erection of the limestone comfort station on the North end of the park.

The diversity of people here make it one of the best places in New York to “people watch.” It’s proximity to a number of cheap restaurants also makes it a great place to enjoy a drink or meal.

Once the site of – you guessed it – a canal, this bustling street is characterized by its open bazaars. Peruse the fish and fruit markets for some fresh produce or pick yourself up some knock-off designer duds, all at rock-bottom prices. Beware of the old “bait and switch” though – it’s one of Canal Street’s favorite scams.

Visit Canal Street for more on this historic street.

Also on Canal Street, make sure to check out the Chinatown Visitors Kiosk, located on the intersection of Walker and Baxter.

Here you will find free guides and maps of Chinatown. As well as:

Inside you will find an enormous 16-foot gold statue of Buddha seated on a lotus with depictions of his life decorating the walls.

Believers come to make offerings in memory of their dead relatives while tourists and other visitors can donate a dollar in exchange for their own personal paper fortune.

Once the site of the most murders per square foot in all of New York, Doyers Street is one of the most fascinating streets in Chinatown. Visit “Doyers Street” or more information on this intriguing side street.

Here you will find the Kim Lau Memorial Arch, a memorial to the Chinese Americans who have served for the US and died in the name of democracy as well as a looming sculpture of Lin Xezu, shepherd of the people and anti-opium advocate.

Located at the corner of Bowery and Pell, the Edward Mooney House is the oldest townhouse in Manhattan.

It was built in 1785 after the revolutionary war and was added to the National Register of Historic Places in 1976.  Now a bank – it is allegedly haunted by turn-of-the-century ghosts. So there we have it, a composite list of Chinatown NYC’s most popular attractions. Not quite ready to return to the West?  Don’t worry, there’s more to see in Chinatown. Pick up some dollar dumplings, or dragon beard candy, get a massage or acupuncture or wander aimlessly in search of your own Chinatown adventure.

Did I miss anything? What’s your favorite place to visit in New York City’s Chinatown? Let me know in the comments sections below.