Ellis Island is an island at the mouth of the Hudson River in New York Harbor, famous for being the main entry facility for immigrants coming into the United States. It was in operation from January 1, 1892 until November 12, 1954. Ellis Island is in the possession of the Federal government as a part of Statue of Liberty National Monument, however, and is under the jurisdiction of the US National Park Service.

Ellis Island was named after Samuel Ellis, a colonial New Yorker. The immigration station was designed by Edward Lippincott Tilton and William Boring. They both received a gold medal at the 1900 Paris Exposition for the station’s design. It was one of the 30 processing stations of the Federal Government. A major processing station for third class immigrants, it processed 70% of all immigrants at that time.

An Intriguing Part of American History

The Ellis Island Immigration Museum gives a fascinating portrayal of the immigrants who passed through this famous port of entry upon arriving in the United States. The museum uses photos, prints, and video to tell their interesting stories.

Ellis Island was once the nation’s foremost federal immigration station. Hundreds of immigrant groups poured into the United States in the late 19th and early 20th centuries. 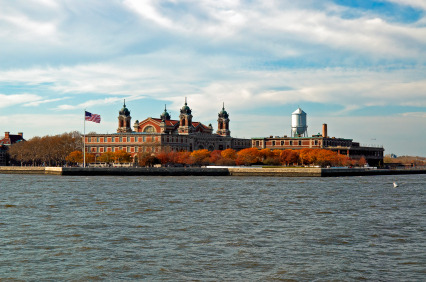 During this time, America became a refuge to people fleeing insufferable situations in their home countries. The conditions these immigrants were trying to escape ranged from famines and economic devastation to religious persecution. These immigrants from all over the world shaped the nation into what it is today.

Over 40% of Americans can trace their ancestry through Ellis Island.

Things To Do at the Ellis Island Immigration Museum

Getting to Ellis Island

The only way to visit Ellis island is to take a ferry. The ferry leaves from the southern tip of Manhattan and stops first at the Statue of Liberty on Liberty Island and then goes Ellis Island. One ferry price includes both attractions.

For more information on getting to Ellis Island and the cost of ferry tickets, click here.

Tip – Making Time for the Museum

The ferry from Manhattan stops first at the Statue of Liberty and then Ellis Island. The entire round trip including waiting in the security line beforehand and visiting both sites can take five or six hours.

Because Ellis Island is the last leg of the trip, many tourists have lost their stamina by the time they get there and either rush the experience or are too worn out to enjoy it.

We suggest saving enough time and energy to allow yourself to enjoy learning about a significant piece of American history at the Ellis Island Immigration Museum. You may even want to consider passing on the Statue of Liberty and instead continuing on to Ellis Island. The views of the statue do not drastically improve between being on the ferry and stepping onto Liberty Island.

The Ellis Island immigration station processed over 12 million immigrants who arrived by steamship.

Generally, only third class and steerage passengers were processed at Ellis Island. First and second class passengers were quickly inspected while still onboard their ship. The reasoning was that these travelers were less likely to have medical or legal issues that would cause them to become a public charge.

Only two percent of arriving immigrants were denied entry, mostly due to either having a contagious disease or if they were thought to be unable to provide for themselves.

Around the start of World War I in 1814, American opinions regarding immigrants began to change as they became more suspicious of foreigners. During the 1920s, laws were passed to restrict the number of immigrants coming into the country.

The restrictions imposed by the Immigration Act of 1924 ended the era of mass immigration to the U.S. In 1924, the main function of Ellis Island changed from immigration processing to a detention center for illegal aliens.

Ellis Island was closed in 1954. It has been restored into what is now the Ellis Island Immigration Museum, which opened in 1990.

Ellis Island is located south of the island of Manhattan, in the Upper Bay. It is part of the State of Liberty National Monument and is managed by the National Parks Service.