The 9/11 Memorial and Museum pays tribute to the fallen citizens and emergency personnel on the September 11 Attacks. This attraction is part of the World Trade Center that has been redeveloped in the heart of Lower Manhattan. Two enormous pools make up the core of the memorial, and the contemporary museum features exhibits relating to the attacks on the Twin Towers. Click to book your 9/11 Memorial Museum admission ticket.

The National Sept 11 Memorial and Museum commemorates the nearly 3,000 lives tragically lost on September 11, 2001. It is part of the new World Trade Center complex in Lower Manhattan, taking up half of the 16-acre World Trade Center site.

The Memorial opened to families of the victims on September 11, 2011, the 10th anniversary of the attack, and to the general public on the following day. The Museum opened in May 2014.

The North Pool at the 9/11 Memorial is situated on the former site of the North Tower. The South Pool occupies the former foundation of the South Tower. Covering exactly 1 acre, each pool has waterfalls that gently cascade down and drain into a seemingly endless hole. The perimeters of the pools are engraved with the names of the individuals who perished during the September 11 Attacks. 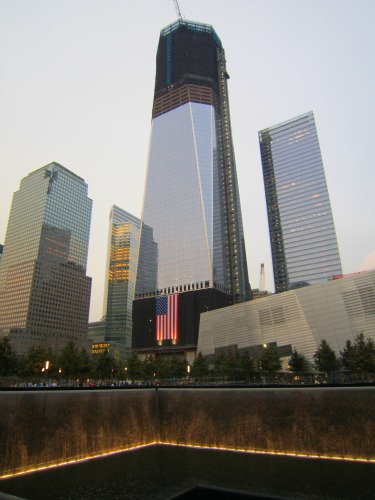 Hundreds of trees and several paved plazas surround these enormous pools, which are the largest of their kind in North America. Miraculously surviving the devastating attacks, the Survivor Tree stands as a symbol of strength and resilience at the memorial site.

More than 110,00 square feet of exhibit space is available at the 9/11 Memorial and Museum. As expected, the permanent collection consists of original artifacts that were recovered after the September 11 Attacks. Some of the items were found just days after the collapse of the towers. After years of excavations, construction workers gradually compiled ordinary items that would eventually be incorporated into the museum’s extensive growing collection.

The Historical Exhibition includes multimedia presentations that cover events leading to and after the attacks. The Memorial Exhibition features the portraits of all the victims of the tragedy. Tens of thousands of original photographs of the Twin Towers are also in the possession of the 9/11 Memorial and Museum. Featuring original retaining walls and other massive structures, Foundation Hall is one of the most interesting features of the museum.

1 WTC, the tallest of the new World Trade Center buildings is pictured here under construction, towering high above the Sept 11 Memorial.

Occupying several blocks in Lower Manhattan, the World Trade Center Station offers convenient access to the 9/11 Memorial and Museum. Housed inside a contemporary structure that’s known as the Oculus, this busy transportation hub is served by several Port Authority-Trans Hudson (PATH) routes. The commuter trains run between the World Trade Center and various destinations in New Jersey, such as Hoboken and Jersey City.

Parking at the 9/11 Memorial and Museum is not available to the general public, so rapid transit is strongly encouraged. You can also rent a Citi Bike in one of the dozens of stations throughout Manhattan.

The design for the memorial, created by architect Michael Arad and landscape architect Peter Walker and Partners, was selected from over 5,200 entries as part of an international design competition.

Two enormous reflecting pools are situated where the former Twin Towers once stood. Cascading waterfalls line the perimeter of each pool. The large voids created by the recessed pools remind of the absence of the buildings that once stood and the loss of many lives.

The tree-filled Memorial Plaza surrounds the pools and is a peaceful place to walk or sit. The sound from the waterfalls drowns out city noise.

The names of the people killed during the 9/11 terrorist attacks and the 1993 World Trade Center bombing are stencil-cut in bronze panels around the edges of the pools. The openings created by the names allow for impressions to be made, flowers and flags to be placed, and light to shine through at night.

Surviving colleagues and the victims’ families were able to make requests that specific names be placed together, something unique to this memorial. The National 9/11 Memorial website has more information on finding a name on the memorial.

The 9/11 Memorial Museum opened in May 2014. The focus of the museum is on telling the 9/11 story, including the events of September 11, 2001, the rescue and recovery effort that took place in the aftermath, and examining the implications of those events.

The museum’s collection includes photos, artifacts, personal effects, and profiles of those who died. It also displays remnants of the former World Trade Center, including a piece of the “Survivors’ Stairs,” by which hundreds of people were able to escape.

The National Sept 11 Memorial is beautiful any time of the day, but will really take your breath away at night. As darkness falls over the city, the waterfalls become illuminated and light shines up through the openings created by the names. The skyscrapers surrounding the memorial light up in the darkness.

Tickets are required for the 9/11 Museum and can be purchased online in advance. It is open from 9 am – 8 pm in the summer and 9 am – 7 pm in the fall/winter.

The Sept 11 Memorial and Museum are located in Lower Manhattan, an area best accessed using public transportation. The Subway, Bus, and PATH trains all stop near the Memorial. Click here for more information on location and transportation options.

Other Things to See in Lower Manhattan: