Visiting the Statue of Liberty and the Ellis Island Immigration Museum is as educational as it is inspiring. As an added bonus, the ferry trip across New York Harbor offers beautiful views of New York and New Jersey.

Standing proudly on Liberty Island in the New York Harbor, the Statue of Liberty is not only an image commonly associated with New York City but one which is also symbolic of liberty for the entire United States of America. It was designed and created during the nineteenth century by Frederic Auguste Bartholdi, a French sculptor who designed Lady Liberty as a sign of a great international friendship between the United States and France.

Although it was originally presented by the people of France to recognize the French-American alliance during the American Revolution, it has since become the symbol of liberty for all Americans and for others around the world. Whether you choose to just drive by and catch a glimpse in one of our cheap car rentals or if you actually climb all the way up her steps, this is onsite you don’t want to miss!

The Statue of Liberty, a long-time international symbol of freedom and liberty, is located on Liberty Island. Most tourists only visit the grounds around the statue. With a little extra planning, you can go into the museum and pedestal levels of the statue, and even up into the crown as outlined below. 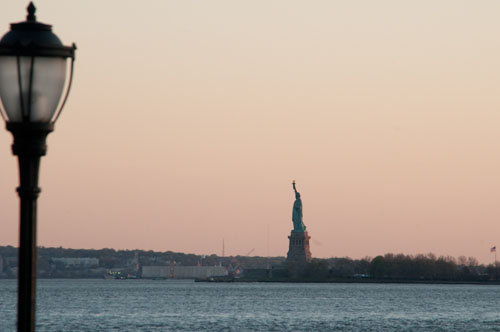 Ellis Island, once the nation’s foremost federal immigration station, is now the site of the Ellis Island Immigration Museum. Over 40% of Americans today can trace their ancestry through Ellis Island.

Ferries make round-trips between Manhattan and the two islands throughout the day. You can visit either one or both islands on your trip. These sites are only accessible by ferry service provided by Statue Cruises.

The iconic statue of a robed woman holding a torch in an outstretched arm was a gift from the people of France to the people of the United States. It was meant to commemorate the friendship between the two countries and also mark the 100-year anniversary of American Independence (although it arrived almost a decade late due to fundraising and other difficulties).

The Statue of Liberty or Lady Liberty, officially titled Liberty Enlightening the World dedicated on October 28, 1886, is a monument commemorating the centennial of the signing of the United States Declaration of Independence, given to the United States by the people of France to represent the friendship between the two countries established during the American Revolution. It represents a woman wearing a stola, a radiant crown, and sandals, trampling a broken chain, carrying a torch in her raised right hand and a tabula ansata tablet, where the date of the Declaration of Independence JULY IV MDCCLXXVI is inscribed, in her left arm.

Lady sits atop Liberty Island in New York Harbor, welcoming visitors, immigrants, and returning Americans traveling by ship. Frédéric Auguste Bartholdi sculpted the statue and obtained a U.S. patent for its structure. Maurice Koechlin chief engineer of Gustave Eiffel’s engineering company and designer of the Eiffel Tower engineered the internal structure and used many novel engineering advances to build the frame. The pedestal was designed by architect Richard Morris Hunt. Eugène Viollet-le-Duc was responsible for the choice of copper in the statue’s construction, and for the adoption of the repoussé technique, where a malleable metal is hammered on the reverse side.

The statue is made of a sheathing of pure copper, hung on a framework of steel (originally puddled iron) with the exception of the flame of the torch, which is coated in gold leaf (originally made of copper and later altered to hold glass panes). It stands atop a rectangular stonework pedestal with a foundation in the shape of an irregular eleven-pointed star. The statue is 151 ft (46 m) tall, but with the pedestal and foundation, it is 305 ft (93 m) tall.

Surprisingly enough, although the Statue of Liberty is so famous across the country, there are still many unknown facts about her Lady Liberty. For example, did you know that she is actually a hollow copper sculptor that was sent to America in three hundred and fifty pieces and then assembled here? Or that there are three hundred and fifty-four steps inside the sculptor and that visitors can look outside from twenty-five viewing windows in the crown? And maybe you didn’t know that when winds reach fifty miles per hour her Lady Liberty actually sways three inches and her torch sways up to five inches? It is clear that there is much more to the Statue of Liberty than first meets the eye! Be sure to make the statue one of your destinations in one of our cheap car rentals.

Quick Facts about the Statue of Liberty

President Grover Cleveland accepted the Statue of Liberty on behalf of the United States on October 28, 1886. The seven seas and seven continents of the world are symbolized by the seven rays of the Statue of Liberty’s crown. The Statue of Liberty holds a tablet in her left hand which reads, in Roman numerals, “July 4, 1776,” – the historic day when America declared its independence from Britain.

If you want to visit both islands, make sure you are on a ferry that departs by 2:00 pm (and note that the security line before boarding the ferry can take 1 to 2 hours).

Tickets can be purchased online in advance through Statue Cruises or you can purchase them at Castle Clinton National Monument, located near the Ferry Terminal.

Directions to the Ferry Terminal/Castle Clinton

Admission to the Statue of Liberty grounds and the Ellis Island Immigration Museum is technically free, but you have to purchase a ferry ticket to get there. One fee includes all three rides – to Liberty Island, from Liberty Island to Ellis Island, and from Ellis Island back to Manhattan.

An audio tour is included.

A Monument Access Pass allows entry to the museum gallery and pedestal observation levels of the Statue of Liberty. It is available at no extra cost when purchasing a Reserve Ticket online from Statue Cruises. The pass can also be picked up for free at the ticket booth at Castle Clinton on a first-come, first-serve basis. It is not available once you get to Liberty Island.

Visitors can now access the crown of the Statue of Liberty. A crown ticket is available for an additional $3/ticket when you purchase a Reserve with Crown Ticket online through Statue Cruises. Crown Tickets sell out fast, even months in advance. Check the Statue Cruises website for availability and reserve early.

Tips for Visiting the Statue of Liberty

Visiting the Statue of Liberty and Ellis Island is not a quick trip. Seeing both islands takes at least 3 hours not including security lines. You should plan to depart the ferry terminal no later than 2 pm if you want to see both.

Every visitor must go through a security checkpoint before boarding the ferry. You will likely have to wait in line for 1 to 2 hours depending on the crowds.

Pace Yourself! Although it’s a worthwhile experience, the lines make visiting these two historical sites a rather lengthy endeavor. Many visitors have lost their stamina by the time they reach Ellis Island, the last leg of the trip. This causes them to really rush their time on Ellis Island or be too worn out for it altogether.

We suggest saving some of your energy, and starting early enough in the day, to allow time explore the Ellis Island Immigration Museum. You can even choose not to get off the ferry when it reaches the Statue of Liberty and instead continue on to Ellis Island. You will still get excellent views of the statue from the ferry.