There is no better place in the world to eat a bagel than New York City. A bagel is one of the city’s defining foods, with varying chew, size, flavor, topping, and toasting preferences that date back to a person’s first version. It’s impossible to pick a favorite, especially in New York City, where there are hundreds of options, but these bageleries stand out. 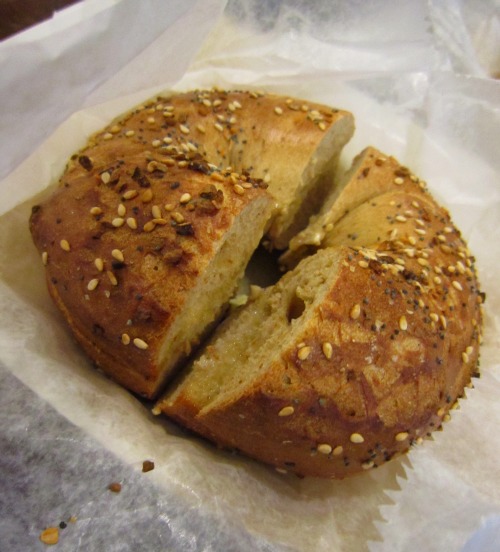 When it comes to breakfast, coffee and a bagel are New York City staples. New Yorkers are always on the go. In a city where everyone is in a hurry and people eat on the run, it makes sense that a food as portable as a bagel would find it’s place.

Bagels are an easy breakfast item to grab and take to the office or even eat while walking there. They are quick and easy, don’t make a mess, and available throughout the city.

You can’t use the word “cheap” to describe many things in New York City, but it does accurately describe the cost of bagels. In fact, bagels may be one of the best deals in the city. A single doughy round starts at about $1 and you’ll be charged more for cream cheese and other toppings.

The city is full of delis, bakeries, and bagel shops, nearly all of which have bagels as a main breakfast item.

Actually, nearly every food establishment in NYC that is open in the morning sells bagels. So New York bagels are very easy to find.

You can even get a bagel without leaving the sidewalk. Street carts dot the areas frequented by morning commuters like Midtown and the Financial District. The carts are especially common near subway stations.

NYC Bagel Shops that are Worth Your Dough

The bagel was a dietary staple in Poland long before it became a standard breakfast item in the United States. It is thought to have been invented in Krakow, Poland somewhere around the 1600s.

Eastern European Jewish immigrants who settled in New York City at the turn of the 20th century are responsible for bringing bagels to the United States.

Decades later, Americans learned to embrace this versatile bread that can be breakfast, a snack, or part of a sandwich for lunch.

Something you will see in New York City but not much in the rest of the country is the bialy. Bialys are round like bagels but are much flatter and have a dent in the middle rather than a hole. They were brought to the United States by Ashkenazi Jews. Bialys are generally sold alongside bagels in New York City.

When Musacchio wanted to open her bagel shop in 2014, she could easily find qualified professionals who had been hand rolling bagels for over 40 years to staff her bakery, owing to the city’s tradition of bagel making. Hand rolling bagels is both an art and a science, according to Musacchio. Bagel makers must constantly adjust their proofing times to account for changes in weather and humidity, which vary month to month and, in some cases, day to day.