Many famous New York City Restaurants have become well-known outside of the city, earning widespread attention for a variety of reasons. Some have a celebrity following, many have made TV or movie appearances, and others are just plain “the best” at what they specialize in.

A few New York City restaurant establishments have been around so long, they are practically woven into the fabric of the city.

The deli serves everything in oversized portions. The sandwiches are piled famously high with meat (according to Carnegie at least 1 pound of meat!) and served with pickles.

What made Carnegie Deli famous?

A celebrity following doesn’t hurt and you don’t have to look hard to know who’s been there. The walls of the deli are covered with autographed photos of famous people who have eaten there since its opening in 1937. Adam Sandler makes reference to Carnegie Deli in “The Chanukah Song.” The famous New York City restaurant served as the filming location for Woody Allen’s Broadway Danny Rose.

Junior’s is a Brooklyn landmark that now has two Manhattan locations, at Grand Central Terminal and Times Square. Sure, Junior’s has burgers and fried chicken, but it’s not their dinners that have put them on the map as a famous New York City restaurant. It’s the cheesecake people rave about, their decadently smooth signature dessert.

Junior’s has perfected a family recipe and process (which hasn’t changed since 1950) to create what is known as “The World’s Most Fabulous Cheesecake”. When the Brooklyn restaurant caught fire in 1981, people gathering on the street yelled, “Save the cheesecake!” Bill Clinton and former NYC Mayor Rudy Giuliani are just a few of the famous faces who have partaken in Junior’s cheesecake.

Grimaldi’s is one of the most popular pizza restaurants in New York City. The flagship location under the Brooklyn Bridge is so well-liked that lines up to two hours long have been known to form outside the door. 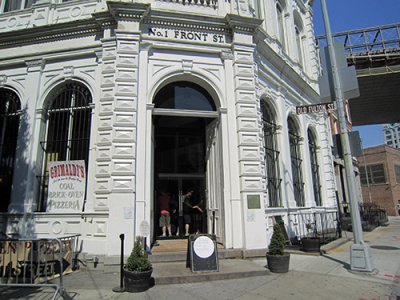 Most will agree that it is worth leaving Manhattan, and even standing in line, to eat at what is widely considered one of the best pizzerias in New York City. It has been rated #1 Pizzeria in New York by Zagat Survey. And in a city full of great pizza, that is quite an honor. Even Frank Sinatra himself was apparently a big fan of Grimaldi’s pizza.

If longevity is any indicator of a good restaurant, then Katz’s Deli must be doing something right.

It was established in 1888 by a Russian immigrant family in New York City’s Lower East Side. 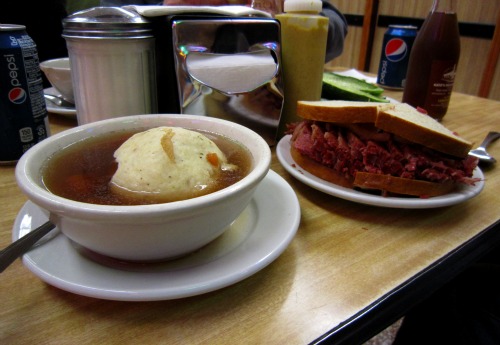 It is the location of Meg Ryan’s famous “faking it” scene in the movie When Harry Met Sally. Celebrity guests of the famous New York City restaurant include four U.S. presidents as well as actors and news anchors.

What started as a humble bakery/coffee shop now has four Manhattan locations.

Eager customers wait in line for the truly adorable cupcakes topped with a thick glob of pastel buttercream frosting and sprinkles. 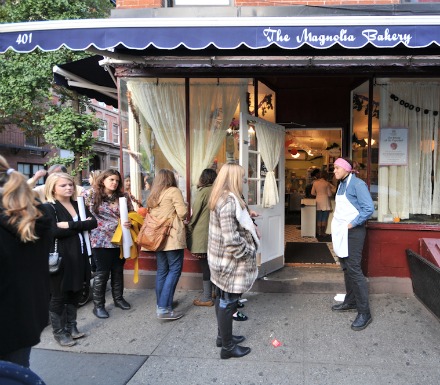 An episode of Sex and the City changed this neighborhood bakery forever, propelling it into virtual stardom and earning it lots of attention. Magnolia has even been credited with popularizing cupcakes nationwide. That is quite a distinction.

Lombardi’s is a Little Italy establishment with a lot of history. The pizzeria, which began serving pizzas in 1905, uses coal ovens to whip up delicious thin-crust pizza. The popular restaurant had to expand into the space next door to accommodate its large clientele. 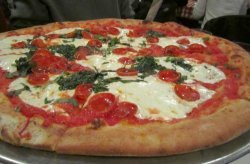 Why is Lombardi’s famous?

H&H; is one of the largest bagel producers in the world and a well-known bagel shop in a city that knows bagels. Besides being popular with New Yorkers (who adore bagels for breakfast), H&H; also ships their New York bagels across the country and around the world.

The bagel shop or the bagels themselves have been featured in numerous movies and shows. In one Seinfeld episode, Kramer returned to his job at H&H; Bagels after being on strike for 12 years. Other film and TV appearances include You’ve Got Mail, Friends, and The Office.

This famous New York City restaurant certainly has a unique feel. The décor is fun, fanciful, and most definitely girly. Go for just dessert (like a supersized sundae) or order an entire meal from the menu of salads, sandwiches, chicken dishes, and more.

When Polish immigrant Nathan Handwerker opened a hotdog stand in Coney Island in 1916, he probably couldn’t envision how big his brand would become. Nathan’s Famous is now an international corporation, selling hot dogs and other products around the world.

Nathan’s hotdogs have gained quite a reputation and following. Fans include Al Capone, Eddie Cantor, and Barbra Streisand. President Franklin D. Roosevelt served hot dogs to the King and Queen of England during their visit in 1939. Jacqueline Kennedy served Nathan’s hotdogs in the White House. Nathan’s is also famous for their “International Hot Dog Contest,” which takes place Every 4th of July at the Coney Island location and draws thousands of spectators each year.

Nothing fancy here folks, just amazingly delicious burgers and ice cream. It is simple, get-what-you-ask-for food at a reasonable price.

Shake Shack has only been open since 2004 but has already expanded to three Manhattan locations and one at Citi Field, where the New York Mets play. 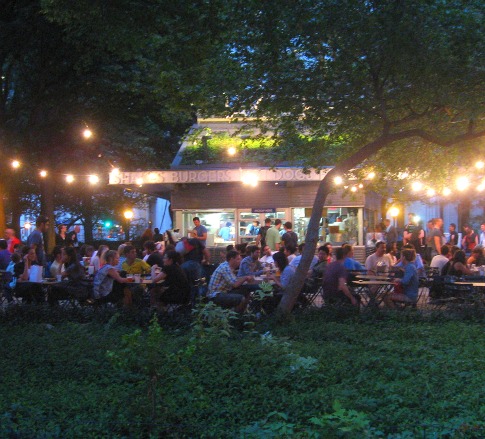 Shake Shack hamburgers, fries, and ice cream are good enough to make New Yorkers (a notably impatient bunch) actually want to stand in very long lines for them. It was given the distinction of “Best Burger” by New York Magazine in 2005.

New York City is known for its incredible culinary scene. From classic Italian eateries to innovative fusion spots, the city has something to offer everyone. Famous New York restaurants have shaped the food industry as a whole, inspiring chefs and restaurateurs around the world. The city’s unique mix of cultures, tastes, and ingredients make it an exciting place to explore delicious eats. So if you’re looking for an unforgettable dining experience, look no further than these iconic New York restaurants!