Hop Aboard a Double Decker Bus!

ew York City bus tours provide excellent access to the city’s best sights and attractions. The tours are guided so you will learn about the city as you see it. Let an experienced New York City Bus Tour Company take you around NYC! Get an overview of the city with the convenience of having your transportation provided. These bus tours allow you plenty of freedom to do NYC at your own pace but take out the hassle of getting around and finding the sights.

Many (but not all) of the New York City bus tours offered are hop-on/hop-off style. This means you can get on or off at any of the company’s bus stops (which are shown on their maps). The buses come by on regular intervals. 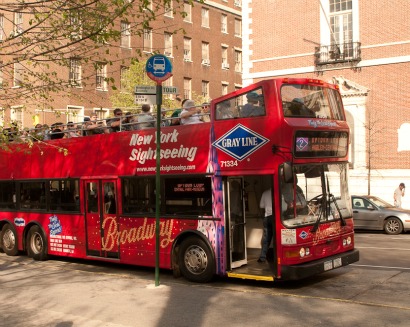 So if you are near an interesting attraction or in a part of town you would like to explore by foot, you can get off the bus and see it.

When you’re done, just go to the bus stop and hop back on the next bus that arrives.

“I really enjoyed my first ever double decker bus tour on Gray Line’s NYC sightseeing tour! It was a fantastic experience! I was able to hop-on and hop-off throughout the day; no need to mess with cabs or the subway.

“The guides were enthusiastic and informative. The tour hit all the highlights of NYC and conveniently made use of my short time in the city. I would highly recommend this tour to get the most out of your time in the Big Apple!”

Both Gray Line New York and CitySights NY are well established tour bus companies that have been providing tours for many years. Both have double decker buses for an exceptional viewing experience. Some packages include a cruise and/or entrance to museums and other attractions.

Gray Line has been giving tours in New York City since 1926. They offer a wide variety of tour options including downtown, uptown, night loops, and Brooklyn.

Pick up your online tickets at a Grayline New York office:
777 Eighth Avenue (between 47th & 48th Streets) or 1560 Broadway in Times Square

CitySights also offers an array of bus tour options similar to Gray Line. Many of their tours also include a ferry ticket to the Statue of Liberty and Ellis Island ($17 value).

Choose the Tour That’s Right for You

Both Gray Line and CitySights offer many different tour options. This gives you the flexibility of choosing the best one for you based on your budget, the amount of time you have, and what you want to see.

Some of the *New York City tourist attractions located along the bus routes include:

*Note that attractions depend on which tour you choose so read the tour descriptions on the company websites.

The New York City bus tours can be purchased for various time limits, ranging from a couple of hours to passes that are good for multiple days.

The Downtown Loop is a great catch-all for seeing many of New York City’s most popular attractions. It covers the entire southern half of Manhattan, from Battery Park (launch point for the Statue of Liberty Ferry) all the way up to the bottom edge of Central Park. No matter which option you go for, this loop is a good one to include for seeing many of New York City’s greatest highlights.

During the Christmas season, the city is most festive at night. In late November, both companies change their Night Tour into a Holiday Lights Tour. This tour is guided and is not hop-on hop-off. The tour goes by many holiday “hot spots” like the Rockefeller Center Christmas Tree, Radio City Music Hall, and the decorated storefronts along Fifth Avenue.

You can buy tickets from the companies’ offices or ticket sellers on the streets, but you get a web discount of $5/ticket when you book a bus tour with either Gray Line or CitySights NY online.

When you purchase a tour for either company, a voucher will be emailed to you. Just print it out and follow the instructions for redeeming it, which will likely involve bringing it with you to the respective company’s office (both are located at Times Square). Your ticket becomes valid as soon as you exchange your voucher for the ticket.