Symphony Space is one of the premier entertainment venues in Manhattan, New York City. From music concerts and theatrical productions, this historic landmark hosts hundreds of annual events in two theatres.

The Peter Jay Sharp Theatre has 756 fixed seats, which include approximately 600 seats in an orchestra-style layout. The rest of the seating is available on the balcony level that overlooks the main stage, which measures about 38×40 feet. Depending on the type of event, the East Gallery and West Gallery might be used for entertainment and logistical purposes. An additional 490 sq feet of event space is available in the Green Room.

Featuring 168 seats, the Leonard Nimoy Thalia Theatre offers an intimate setting for a variety of events. Measuring about 11 x 9 feet, the main stage is designed to accommodate only a few entertainers or presenters at a time. Spacious enough for just under 50 patrons, Bar Thalia serves cocktails and other fine spirits in a chic setting that reflects Symphony Space’s rich heritage. Wine tastings and Jazz concerts define the cool ambiance of this bar that overlooks the hustle and bustle of Broadway and 95th Street.

One of the wealthiest businessmen in New York City during the early 20th century, Vincent Astor funded the construction of a multi-level market building that would eventually become the permanent home of Symphony Space. Opened during the height of World War I, the grand market failed to meet its expectations and shut down after only a few years of operation. Nevertheless, passionate New Yorkers couldn’t let the splendid architecture of the short-lived enterprise go to waste.

Immediately after its closure, the Astor Market was transformed into an ice skating rink and an eatery. At the beginning of the Great Depression, the demand for such facilities dramatically declined. The rink and restaurant were replaced with small theatres that were quite popular among working-class Americans, who needed to get temporarily get away from the stress of economic hardship.

The modern history of Symphony Space can be traced back to the late 1970s. Isaiah Sheffer and Alan Miller sponsored an event that was called Wall to Wall Bach. Without charging admission fees, this marathon-style concert entertained local crowds. Since then, the venue has expanded to host a wide range of events beyond just music performances. For nearly three decades, the New York Gilbert and Sullivan Players dominated the scene at Symphony Space. Specializing in comic opera, this theatre company has brought plenty of laughter to countless spectators.

Situated along Broadway, Symphony Space is nested in one of the most commercialized parts of the Upper West Side neighborhood in Manhattan. Served by the 1, 2, and 3 lines of the New York City subway, the West 96 Street station is located only steps away from this entertainment venue. All three subway lines run through the western part of the borough and stop at the busy New York Penn Station in Midtown. 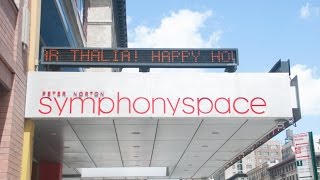 There are literally dozens of Metropolitan Transportation Authority (MTA) bus stops along Broadway in the Upper West Side. You’ll also notice the seemingly endless yellow taxis along this famous thoroughfare.

Due to its proximity to the famous Central Park, Symphony Space is naturally surrounded by plenty of indoor parking garages. In fact, there are more than 10 garages within a one-mile radius of this performance venue. Speaking of cars, this attraction is conveniently accessible from the Henry Hudson Parkway at 95th Street. Connected to the George Washington Bridge, this parkway runs along the entire western flank of Manhattan.