The subway in New York is fantastic and efficient, but if you have the time and the sun is shining, there are few things more pleasurable than taking a walk or a bike ride across the East River. Most visitors prefer to cross the far more famous Brooklyn Bridge, which is lovely but admittedly difficult to reach. The Williamsburg Bridge, on the other hand, connects two of New York City’s most fashionable neighborhoods: Lower East Side Manhattan  and Williamsburg Brooklyn.

Williamsburg Bridge is a suspension bridge across the East River linking Manhattan’s Lower East Side with the Williamsburg neighborhood in Brooklyn. Williamsburg was the second bridge to cross the East River. Construction began in 1896 with Leffert L. Buck as chief engineer, Henry Hornbostel as architect and Holton D. Robinson as assistant engineer. The bridge opened on December 19, 1903 at a cost of $12,000,000. At the time it was constructed, the Williamsburg Bridge set the record for the longest suspension bridge span in the world. The record was only broken in 1924, when the Bear Mountain Bridge was completed. 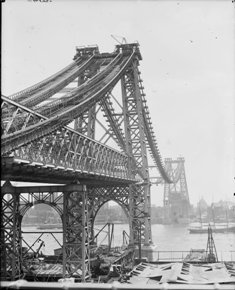 The Williamsburg Bridge is an unconventional structure, as suspension bridges go. Although the main span hangs from cables in the usual manner, the side spans leading to the approaches are cantilevered, drawing no support from the cables above. The main span of the bridge is 1600 feet (488 m) long. The entire bridge is 7308 feet (2227 m) long between cable anchor terminals, and the deck is 118 feet (36 m) wide. The height at the center of the bridge is 135 feet (41 m) and each tower is 335 feet (102 m); these measurements taken from the river’s surface at high water mark.

The only suspension bridges in New York City that still carry both automobile and rail traffic are the Williamsburg Bridge and the Manhattan Bridge. There were once two sets of trolley tracks in addition to this two-track rail line connecting the New York City Subway’s BMT Nassau Street Line and BMT Jamaica Line.

The Brooklyn landing is located between Grand Street and Broadway, both of which had ferries at the time the bridge was built but went out of business in the years since. Since the 1980s, the bridge has been undergoing reconstruction, primarily to repair damage caused by decades of neglected maintenance. In the 1990s, the cast iron stairway on the Manhattan side and the steep ramp from Driggs Avenue to the footwalks on the Williamsburg side were replaced to allow handicapped access. In December 2003, the bridge celebrated its 100th anniversary. Motor vehicles continue to be able to cross the bridge without paying a toll.

The two right-hand lanes will be reserved for pedestrians, while the two left-hand lanes will be reserved for bicycles. The purpose of the first section of the walkway is to get you to the bridge itself. There’ll be a slight incline all the way until you reach the bridge. The pedestrian path continues as you walk over the East River, now that you are definitively on the bridge. Slowly and steadily, you’ll get closer to the massive steel towers that will be holding steady above you. As you proceed along, you will see views of the East River, the Manhattan Bridge, the Brooklyn Bridge, and the Statue of Liberty in the distance.

Sadly, the Williamsburg Bridge is not ideal for photography due to a couple of fences that block the view. However, with the right angles and photography competence, you should be able to capture some images through the fencing.

When you cross the bridge, your journey does not end. It doesn’t matter if you’re walking towards Brooklyn or Manhattan. In either case, you’ll end up in one of New York City’s coolest communities. Exiting in Williamsburg, you’ll be in the foremost Brooklyn neighborhood. As you walk north to McCarren Park, you’ll move by more restaurants, bars, cafes, and boutique shops than you could ever count. Don’t fret if you’re walking towards Manhattan; the Lower East Side is just as lively as its neighbor across the river. Take a bite at well-known restaurants such as Russ & Daughters or Katz’s.